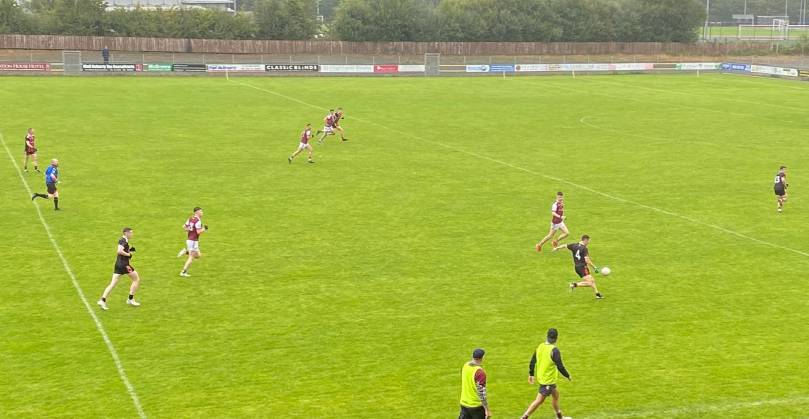 Termon held on to defeat a dogged Red Hughs side by a point in a game of two halves in the final IFC quarter-final at O’Donnell Park.

Termon were 1-5 to no score up after 25 minutes but Red Hughs kept chipping away at the scoreline and would’ve felt hard done by at full-time.

The game started with Termon on the front foot, but the shooting boots weren’t on early in the game as first 10 minuytes saw six wides, four for Francie Friels men.

It was 12 minutes before we’d see a score and by the quarter-hour mark, Termon were five up.

Anthony Grant got the scoring underway on 12 minutes from 30 metres to the right of the goal.

Minutes later, Daire McDaid scored a free from the same position and not long after he had the ball in the net.

After a long ball into the square, he challenged keeper Luke Kelly and before taking the shot on into the empty goal he was bundled over with referee Marc Brown awarding a penalty.

McDaid stepped up and fired to Kelly’s right into the corner.

Stephen Black got Termon’s third point from the exact same position as the first two.

Red Hugh’s first chance came in what could’ve been a goal, as Stephen McMenamin did great to find an unmarked James Doherty but his shot from the left hit the side netting with Killygordon staff and fans thinking it went in.

Another two Termon points came from Bobby McGettigan and Steve McElwaine had them 1-5 to no score ahead with 25 minutes gone.

Two points from Jack Bradley and Jack Gillespie from a free reduced the scoreline to six points at half-time, 1-5 to 0-2.

Red Hughs thought they had a goal when Calvin Bradley had the ball in the net but referee Marc Brown had already blew for a foul and a free-kick, much to the annoyance of the Red Hughs men.

Red Hughs rallied in the second half as Tim Callaghan got one from the left while Calvin Bradley scored a great point after a long ball found him wide right.

His next point was near identical but just at a tighter angle but Enda McCormack and Jack Alcorn scored two points to keep the Killygordon side at bay.

Jack Gillespie scored two great frees and Callaghan was frustrated when his point was pulled back for a free but the whistle had been blown, with the resulting free being missed.

Gillespie got another two great scores, one from play with minutes remaining as Red Hughs pushed for the point that would tie the game.