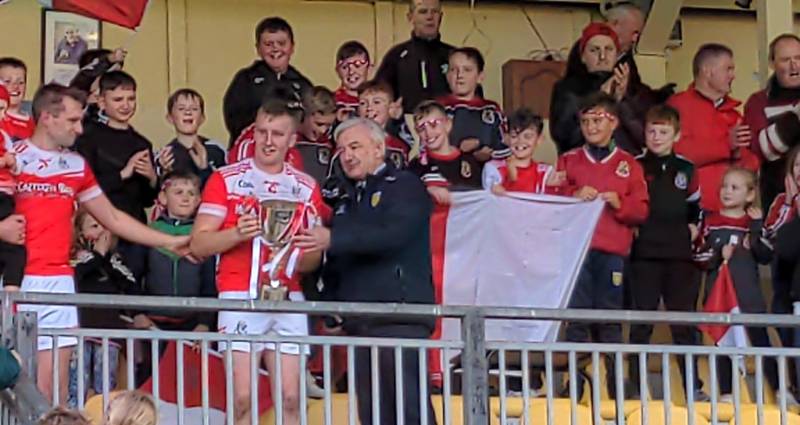 A low scoring affair, but a good game nonetheless as Dungloe controlled the game from start to finish in style, with Darren Curran’s goal with five minutes to go all but confirming the victory

Oisin Bonner began the scoring after seven minutes from the right hand side, with Danny Rodgers converting a free.

Barry Curran pointed from play while Daniel Ward’s free had them four points ahead.

Phillip Doherty got things going for Naomh Columba after 26 minutes as the centre back ran through and pointed well.

The two sides traded scores after the break but the scores weren’t coming fast as Dungloe were smart in slowing the game down.

Ward got Dungloe going again with a brilliant strike, while Eric Carr got Naomh Columba’s first of the second half, but they had a couple of chances before missing.

Naomh Columba had plenty of possession but weren’t converting unlike Dungloe as Oisin Bonner got their second point from their second proper attack of the half.

Kevin McNern then pointed for the Glen men with 10 minutes to go and three points down but the next score decided the game.

Aaron Ward’s shot went off target but it was picked up by Dungloe and Shaun McGee found Darren Curran who fired low under Paddy Byrne and into the net, 1-6 to 0-3 and just five minutes to go.

Ryan Gillespie pointed from a free for Naomh Columba but Dungloe held possession well and Naomh Columba didn’t look to threaten, as Daniel Ward and Oisin Bonner finished the scoring with a point each.

Naomh Columba leave O’Donnell Park disappointed having lost both A & B finals, but a return to the Senior Championship is the reward for Dungloe.