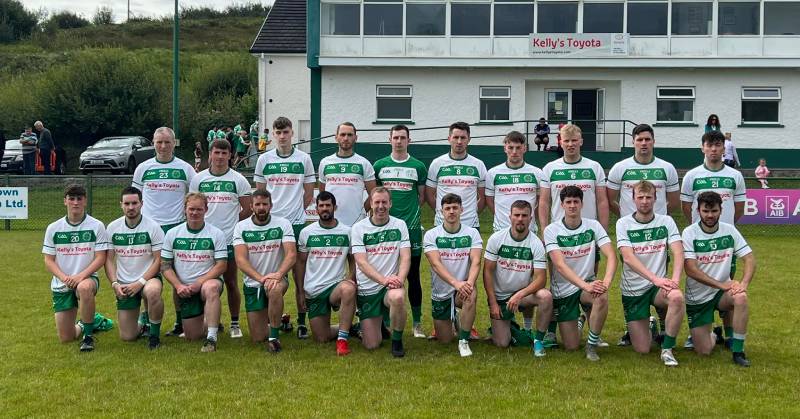 St. Naul’s got their first win of the 2022 Senior Championship to ensure survival for next season as Bundoran were relegated to the Intermediate Championship at Tirconaill Park.

St. Naul’s controlled the game from the 20th minute on, going into half-time four points up and limited Bundoran to two scores in 30 minutes in the second half before a late Gary Clancy consolation goal made the scoreline look a bit better for Bundoran.

Bundoran began on the front foot but were wasteful in the opening ten minutes, Gary Clancy’s free the only score in this period.

Stephen Griffin got St. Naul’s on the scoreboard and Stuart Johnson put them ahead.

Clancy’s free levelled before Johnson got his second score of the game, but Cian McEniff got Bundoran level on 20 minutes at 0-3 apiece.

The final ten minutes were dominated by the Mountcharles men as Griffin pointed from a free while Peadar Mogan scored two great points, one just before half-time.

Declan Duignan got two in a couple of minutes, while Clancy’s third free was all Bundoran could muster up as they went into the break 0-8 to 0-4 down.

Griffin got two more in the second half, one from play, while Bundoran had a goal chance through Jamie Brennan but Gavin Mulreany pulled off a brilliant save with his foot to deny Bundoran a goal that would have brought it back to three points.

Gary Clancy got his first point from play in between two Martin Breslin points for St. Naul’s to make it 0-12 to 0-5 and it looking like game over.

Another Clancy free was countered by a great Stephen Griffin score as Bundoran had little hope despite nine minutes of added time being played.

And while Clancy somehow found the back of the net from a close free with St. Naul’s players covering the goal, it was too little too late as the final whistle went seconds later as St. Naul’s will play senior football again next season.