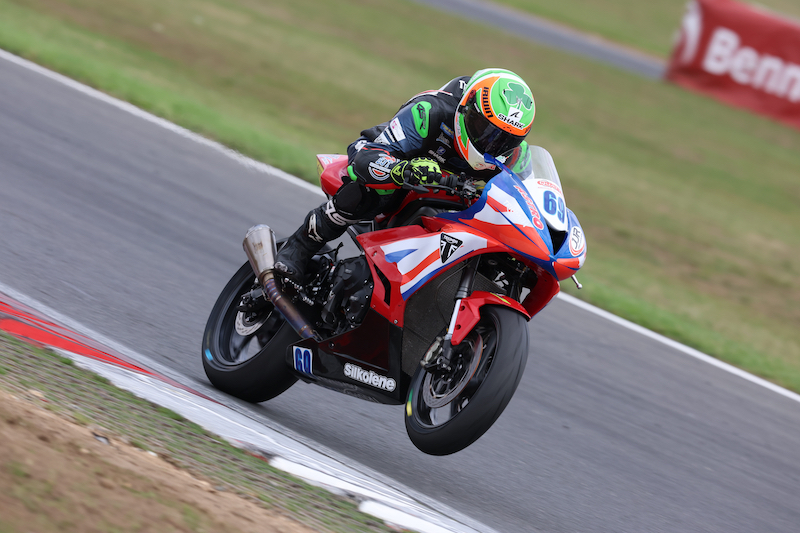 The British Superbikes Championships got of to a bad start in Donington Park this weekend with high winds and torrential rain forcing the rare cancellation of Practice day for riders’ safety.

Day 2 dawned cold but sunny for the Premier Class Supersport which got underway with two days of televised coverage of all their sessions.

The penultimate round saw some new wild card riders swelling the already bursting grid including a World Supersport Racer.

Rhys Irwin on his factory supported Astro Triumph was strong in Race 1 finishing 7th overall saw him 4th fastest racer on the grid giving him a second row start for Race 2.

With the fastest 8 racers lapping within 0.2 sec, it was all to race for. Race 2 Rhys pushed forward with the front runners holding his position, but a harsh drive through penalty from race direction for a jump start cost him time in the pits resulting in him rejoined the race well back in the pack. The young racer held his nerve and steadily climbed through the pack finishing an unbelievable 8th overall despite the time penalty.

“This has been one of the best weekends we have had with this bike. The set up felt good and I was running in a position that I could fight for a podium, but I made a wee mistake on the line and at this level you just can’t afford mistakes, which although it cost me a podium I showed what I could do with my lap times which would have left fighting at the front without the penalty. Thanks to Stu, my Dad Ivan and the team for the best set up this weekend and I can’t wait now until Brands in two weeks”

“This has been a great weekend for me. It’s my first year in this class which has seen an anreal ammount of talent come back into the class over this last two years. I held my top 10 position for most of the race I got up to P9, so I am delighted. I have a great team set up with Caroline and Charles who are week in week out, along with my long standing mechanic Wesley Regan, giving me a really good race environment, they just work constantly all weekend finding the best bike set up for which I am really grateful.”

You can see the boys in action in two weeks time at Brands Hatch with full TV coverage of their races.