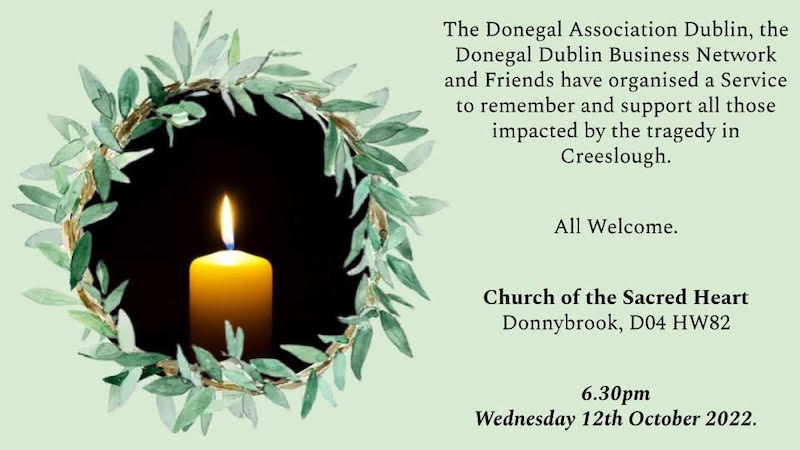 Donegal people in Dublin to host Memorial Service for Creeslough

The Donegal Association in Dublin and Donegal Dublin Business Network (DDBN) and Friends have organised a service to remember and support all those impacted by the tragedy in Creeslough.

Paul Doyle, Chairperson of the DDBN has said the DDBN is very saddened by the events in Creeslough.

He added “Our hearts go out to everyone impacted by the tragedy, those who have lost loved ones, those who are injured, whilst also appreciating the responders and medical staff.

“We will meet up on Wednesday together, simply to show our sympathy to all those impacted in any way back home by the tragedy, and for them to know that we are thinking of them all”.

Kevin McFadden, originally from Carrigart and Chairperson of the Donegal Association in Dublin said his organisation had been formed as a result of another disaster in Donegal.

“The terrible tragedy in Creeslough has had a profound impact on the entire country and none more so than people with roots and connections to the county.

The Donegal Association Dublin was formed in 1935 as a direct result of the Arranmore Disaster in which 19 people died and Donegal people based in Dublin came together to support the families of those affected.

“The need today for us to share the grief and show support to the families and friends affected by this awful event are as strong as they were in 1935, as well as the locals and emergency workers who worked under such difficult conditions at the scene.’

The service will be broadcast live on the Donnybrook parish webcam.