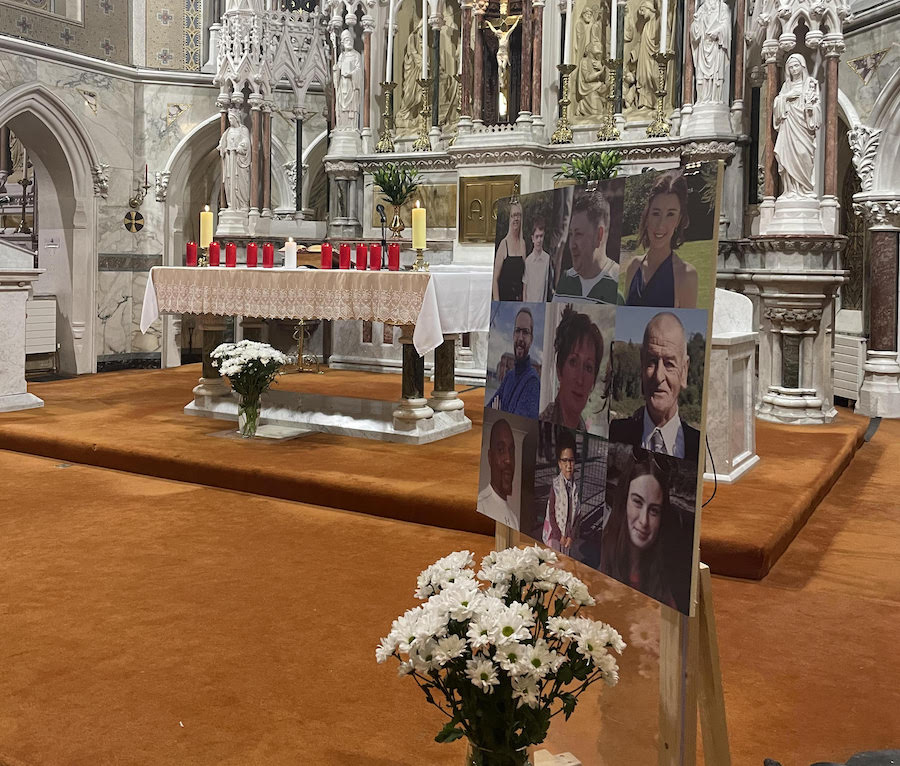 Donegal people gather in Dublin to remember people of Creeslough

The Donegal community in Dublin came together last night to support all of those impacted by the Creeslough tragedy with a service of remembrance in the Church of the Sacred Heart in Donnybrook.

Organised by the Donegal Association and the Donegal Dublin Business Network (DDBN), the gathering was open to all denominations.

The service was celebrated by Monsignor Ciarán O’Carroll of the Donnybook Parish, accompanied by Fr Maurice McGill of the Mill Hill Missionaries who is originally from Ardara.

Eleven candles were placed on the alter by representatives of the Donegal and Dublin communities – ten for the deceased and one for the injured survivors.

Readings were given by Paul Doyle of the DDBN and Kevin McFadden of the Donegal Association, Dublin.

Prayers of the Faithful were offered by Charlie Gallagher, a young man from the Creeslough area who is in college in Dublin.

The congregation prayed for the victims, the injured, their families, the medical staff and for Fr John Joe Duffy who is providing such support to the community at this difficult time.

A reflection was written especially for the service was by DDBN member Dr Ivan Coulter from Inver (see below).

Music provided by Jenny Porter, whose mother is from Moville.

Songs were sung by Ronan Dillon from Letterkenny and international recording artist Andrea Corr, whose mother is originally from Lifford.

Andrea closed the service with a poignant rendition of Amazing Grace.

Sometimes in the dark there is no light

Somewhere the light leaves no shadows

In shadows there is fear of dark and hope of light

The sun being no more their light by day

Through our memories they will live with us every day

Their spirits’ shadows will shine like a prism from the dark

The weight of loss felt by so many, though never light

Will disperse within the spirits’ lengthening shadows

So that into the darkness of hearts will be shown eternal light.