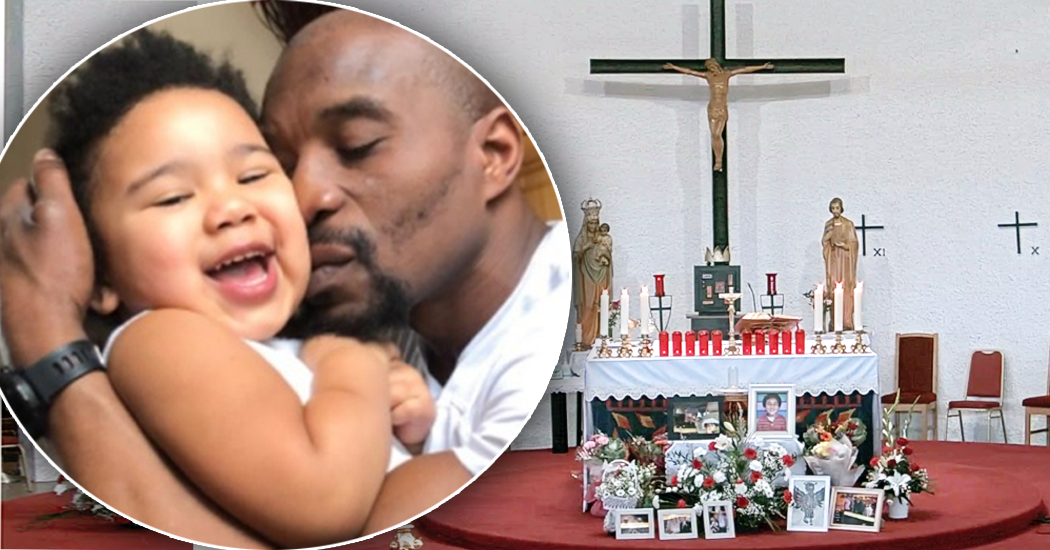 The father and his five-year-old daughter killed in the Creeslough explosion will always be remembered as a picture of happiness as they scooted through the village together, their heartbreaking funeral mass heard.

Shauna and Robert Garwe were the last two victims of the horrific event to be laid to rest earlier today.

The 5-year-old schoolgirl and her doting dad, 50, were found by emergency workers wrapped in each other’s arms in the rubble of the awful tragedy.

They had gone to the Applegreen service station to collect a birthday cake for mum, Aine.

The family were looking forward to life together living in the village they had moved to live in a year or so ago.

Robert was working in construction and Shauna was settling into her first year at Scoil Mhuire National School in the village.

Life was brimming full of expectations until the still unexplained tragedy stole their lives from them in a matter of seconds.

Fr John Joe Duffy told sobbing mourners at St Michael’s Church: “Robert and Shauna are now side by side in heaven. They are side by side as they were in the shop. Her father, in that split second, just wanted to protect his beautiful daughter.”

Little Shauna was a playful, bubbly, and talented child who left a lasting impression on all she met, he added.

Her daddy Robert was so proud of Shauna and all his children, he was proud of his homeland of Zimbabwe and he was a friendly face to many.

Their fun-filled life was remembered this morning by Fr Duffy, who said that Robert, Shauna and Áine were a wonderful family unit.

Mourners had travelled from Dublin, England and Zimbabwe, Robert’s home country, to mourn a father and his beloved and much-loving beautiful little girl.

Their special times together were represented in the gifts offered at today’s Mass.

The scooter which was part and parcel of their lives in the village. There was a catapult which Robert and Shauna deployed while hunting together. Robert’s hat, which he always wore, was presented to the altar, as were Shauna’s favourite toys – Doggie the dog and her unicorn, called Pinkie Pink Pie.

The Edenmore creche, where Shauna attended in Dublin, presented photos, a floral tribute and a memory book dedicated to little Shauna’s legacy in their community.

Shauna had only started primary school at Scoil Mhuire in Creeslough a few weeks ago, having also attended Creeslough Community Creche, but her lovable personality was shining through already, Fr Duffy said.

He shared fond memories from her teacher Kathleen, who said she had artistic skills far beyond any Junior Infant.

Shauna loved to draw pictures of her family and their dog Kylo, and she loved to show off her daddy’s drawings with pride.

She also had a brilliant sense of humour, a caring nature and she loved art and style, mourners were told.

Fr Duffy said: “She was so caring and if she saw a classmate upset she was sure to run over to them and give them a hug and help them.

“She loved her style. She was a girl with beautiful shiny shoes and fantastic coats. She had a spare pencil case to school which had her mirror and other bits to make sure she looked her best. She got that trait from Dublin and Zimbabwe,” Fr Duffy said.

Robert, he said, was very proud of his Zimbabwean roots and his children. His father was a teacher in a mission school, and Robert always likes to keep that link with home.

In Creeslough, he loved to promote the benefits of his iconic scooter with Fr Duffy recalling Bob showing it off to construction workers recently.

“He had that friendliness and keeping fit and keeping well was so important to him,” Fr Duffy said.

Robert, Shauna and Áine were embraced by their neighbours in the Massinass Cottages estate, he added.

“There were more older people in the estate and they adopted Shauna like a little granddaughter.

“That little beauty, she was even extra special, she gave them a newness of life. She was a radiant beacon of light and happiness and joy.”

And a stand-out memory of her neighbours would be the sight of Shauna wheeling her dog Kylo and live chickens along after her.

Shauna was an animal lover who had amazing ingenuity for a child, Fr Duffy remarked. She would have made a great vet.

“I have no doubt she would achieve anything she set her mind to in life,” he said.

“All of that doesn’t take away how difficult it is to comprehend the loss of a young man and a beautiful five-year-old child.

“While our hearts will remain sad for many many years in this community and pain will continue, for a long time, we will also feel the warm radiance of the rising sun each morning as we walk through our lives and we always know, and hold in a very special place in our hearts Shauna, Bob and the other eight that have gone before us. They will always walk with us and that is what will bring us comfort.”

Again Donegal Minister Charlie McConalogue was present representing the government, and many other public representatives representing the Oireachtas and Donegal County Council including Cllr Anthony Molloy and Chief Executive John McLaughlin alongside representatives of An Garda Siochana and emergency and rescue services and healthcare staff from the Republic and Northern Ireland.

Others included medical consultant Dr Gerry Lane who spent hours on the scene immediately after the explosion.

As the final funeral for the Creeslough tragedy victims came to a close, Fr Duffy issued a special word of thanks to Comdt Mortimer, President Higgins and his wife Sabina for joining the community during this week of mourning.

“You have come to a most beautiful and idyllic place that has been ruptured by this tragedy. I think you saw the real beauty first hand, that unity of people, not only from this island of ours but beyond it, but the beauty of a community working together,” Fr Duffy told the President.

Outside in the bright October sunshine, hundreds of people lined the streets of the village with heads bowed as Robert and Shauna’s cortege were led away for a private cremation.

As the cortege left the church, people gathered in quiet groups, their hearts still aching from the events which ripped a hole in the community’s spirit and which stole ten of its beloved citizens.

Heartache at funeral of father and daughter who ‘scooted’ their way into Creeslough’s heart was last modified: October 16th, 2022 by Staff Writer
FacebookTweetLinkedInPrint