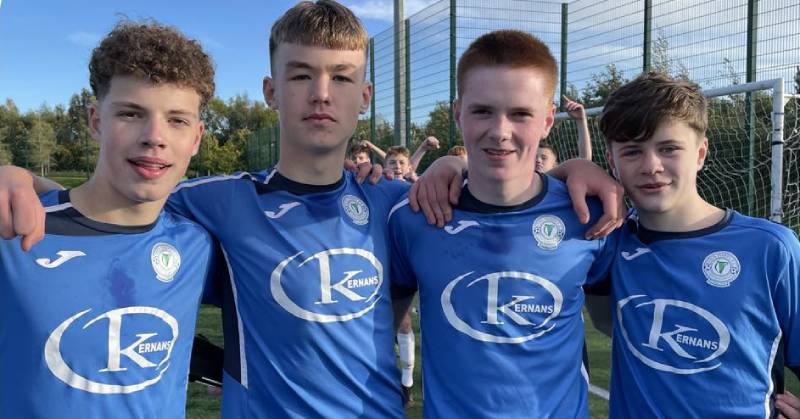 The young Harps drew 4-4 with St. Pat’s at TU Blanchardstown on Saturday with goals from Declan Patton, Ronan Buchanan and Gavin McAteer getting two.

Patton gave Harps the lead when he got the final touch to a Gavin McAteer corner but St. Pats levelled on the half hour mark.

Harps went ahead again when Buchanan fired into the bottom corner but with 10 minutes remaining St. Pats equalised again to force extra-time.

At the end of the first period Harps took the lead for the third time in the game with an outstanding finish from McAteer. He raced onto a through ball from Shane Sweeney before firing across the keeper and high into the top corner.

But the Saints were equal to the scoring power of the Donegal side, forcing a penalty shootout in Dublin.

And Harps came out on top, converting all five of their penalties to ensure a 5-3 win and a passage to the League final.

The under-14 side won the 2021 National Cup final against Wexford on penalties and this year’s side will be hoping to do the same.

Meanwhile, the Under-17s won 5-1 against Carlow Kilkenny as Shaunie Bradley bagged a hat trick, while Aaron McLaughlin and Tiernan Ruddy also got on the scoresheet.

The Under-19s won 4-0 against Athlone Town through goals from Sean O’Kane, Marc Doherty, Nathan Plumb and Damien Duffy, while the Under-15s played out a 0-0 draw away to St. Pat’s.