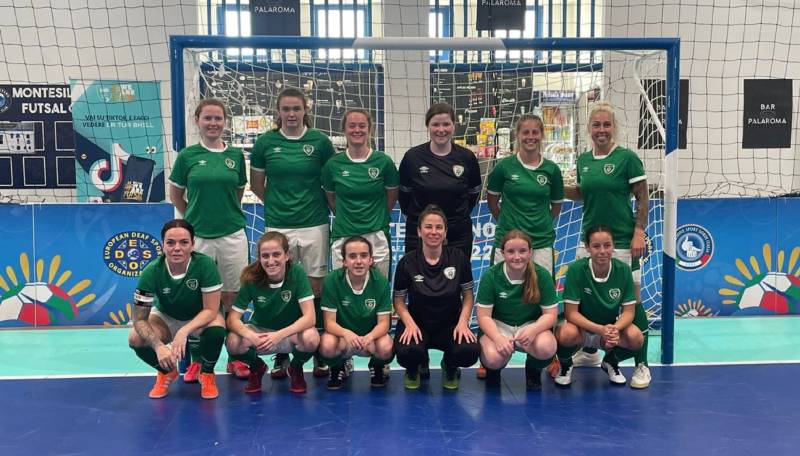 Three Donegal women were a part of the Ireland team that today confirmed their place at the World Deaf Fustal Championships with a win over Sweden.

Lagan Harps’ Catherine Grier scored the opener while Leah McMonagle of Raphoe Town and Drumbar United’s Teagan O’Reilly were also a part of the team who qualified and the trio will be hoping to make the squad that travel to Brazil next year for the World Championships.

Ireland made it to the quarter-final stage of the European Deaf Futsal Championships in Italy before losing to Poland, but a top six finish would guarantee them qualification for the World Cup.

And Grier got Ireland off the mark in the game against Sweden to decide who would finish top six, putting them 1-0 up while a Carmel Heery pass was deflected into the Sweden goal to make it 2-0 at half time.

Rebekuh Grant scored twice, the second after a 1-2 with Grier, but Sweden got one back. Nathalie O’Brien made it 5-1 before a consolation from Sweden made it 5-2 at full-time.

The top six finish means they will be going to the World Cup next year, but they still have one last game against the winners of Italy and the Netherlands to decide the 5th placed finishers at the tournament.

Ireland won 5-0 in the first game against Israel, with Lagan Harps woman Grier scoring the second goal of the game.

They then lost 5-2 to the 2018 runners up Germany, with Grier getting both goals for Ireland.

And Grier made it 3-1 to Ireland in their final game against the third place side from 2018, Spain, but the Spaniards came back to win 8-6.

Ireland then won 4-0 against Switzerland to reach the quarter-finals, but were then defeated 6-0 by Poland.