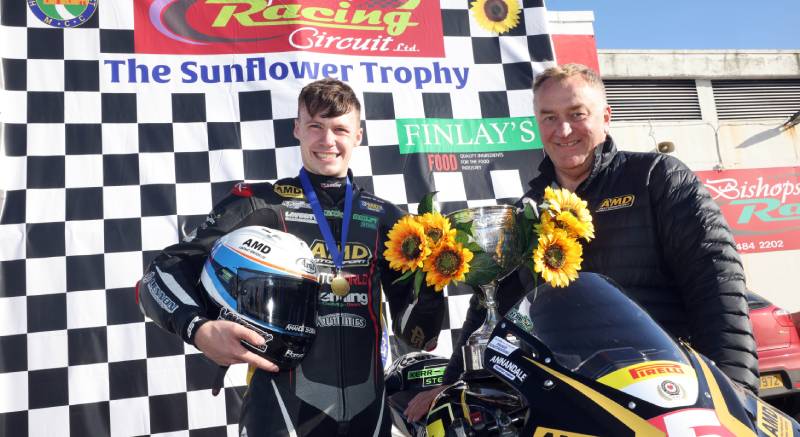 Richard Kerr wrapped up his already successful 2022 season with a superb hat-trick of wins at Bishopscourt at the weekend, which included the prestigious Sunflower Trophy.

With conditions cloudy but dry, Saturday’s race was stopped after one lap when Sam Laffins crashed out and when it restarted over 10 laps, Alastair Seeley grabbed the holeshot although it didn’t last long before Richard took the lead.

Riding the factory prepared CBR1000RR Honda Fireblade, the Kilmacrennan rider moved past Seeley at the second corner and never looked back, pulling clear for a dominant win. Indeed, with a fastest lap of 1’06.614, his advantage was a commanding 6.27s over Seeley at the chequered flag.

It completed a hat trick of wins for Kerr, which started with Friday’s wet Superbike race, where he did battle with the 600cc machine of Eunan McGlinchey for the entire 10-lap distance. Going into the final lap, McGlinchey led but Richard managed to overhaul him and take victory by 0.443s. 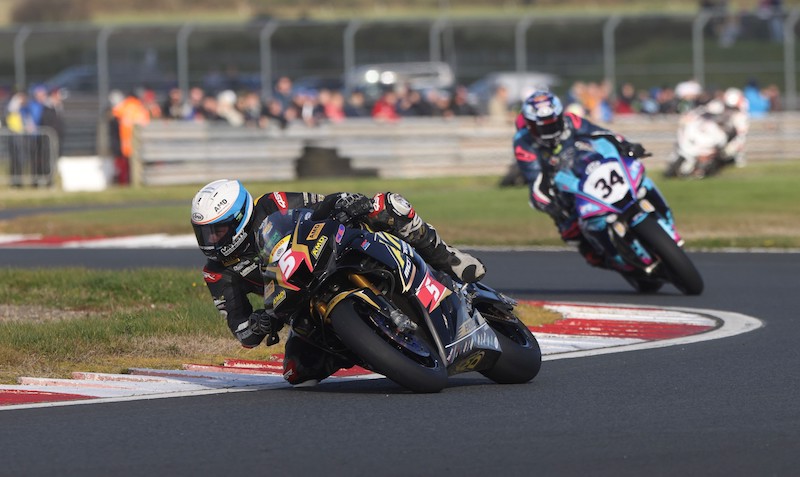 With wet but drying conditions for the second Superbike race, held on Saturday morning, Richard battled with Seeley on this occasion around the 1.824-mile circuit. The duo had opted for slightly different tyre combinations, Richard choosing a wet front and intermediate rear compared to Seeley’s choice of intermediates all round, and although Seeley led for much of the way, Richard moved ahead on the final lap and pulled away for another win.

The results marked a superb end to the season for both Richard and Fraser and Mary Dykes’ team, which had seen them finish fifth overall in the Pirelli National Superstock 1000 championship – after taking two wins – and also win the Neil Robinson Memorial Trophy earlier in the season.

Richard Kerr: “It’s really nice to get my name on the Sunflower Trophy and win all three races as it’s made the perfect end to the season for both myself and everyone connected with the team.

“All three races went to plan and once I got by Alastair in the main race, I pulled away on each lap so I couldn’t have asked for anymore. It was only a ten-lap race so to win by more than 6s was pleasing. The other two races were a bit trickier especially Friday’s where I struggled for grip and feel on the exit of the corners.”

Richard added: “With less power, Eunan may have had a bit of an advantage on his 600 and we swapped positions regularly, but I managed to be in front when it mattered. In Saturday’s Superbike race, the dry line was only about eight inches wide but with my wet front, I knew I could move onto the wet part of the track and overtake Alastair.

“The plan worked perfectly! We don’t get to race at home very often so to get a hat-trick in front of all my local sponsors, family and friends is the perfect end to the year so a big thank you to everyone involved.”