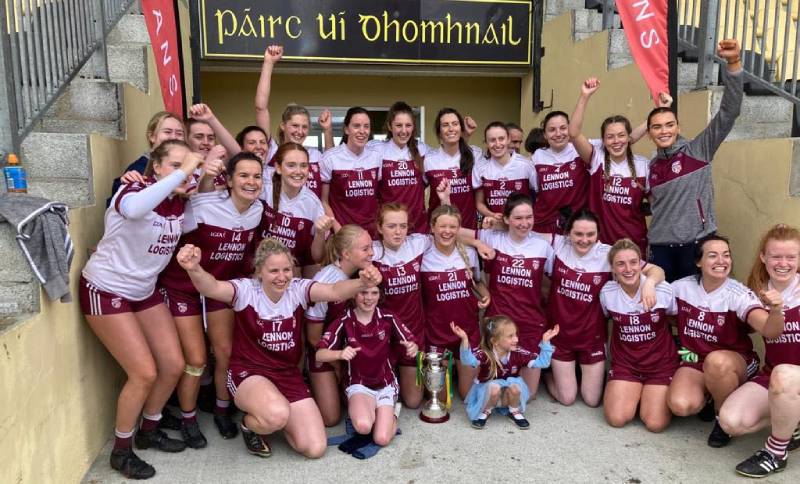 Termon knocked out of Ulster Championship by goal scoring Lurgan

Three seconds-half goals proved the winning formula for Lurgan from Cavan as they produced a battling performance to overcome Donegal Senior Ladies champions Termon in a hard fought exciting game at the Burn Road.

The visitors were five points behind at halftime despite creating a number of good goal chances but they found their  shooting boots in that regard in the second-half to just squeeze through by one point.

Termon led 0-06 to 0-01 at half-time , Geraldine McLaughlin with 0-05 of those. They also had goalkeeper Orla Corry to thank as she produced three super saves to deny Lurgan after they had opened up the Termon defense.

Termon had the first goal chance in the 2nd minute when McLaughlin set up Ciara McGarvey but she was denied by Lurgan keeper Evelyn Baugh.

Geraldine McLaughlin kicked three points in six minutes but in between those Orla Corry denied Aoife Brady , Catherine Dolan and then Emma Toland with three brilliant saves in one to one situations.

Geraldine and Shannon McLaughlin both added points before Aoife Brady finally got Lurgan on the scoresheet with a point.    Geraldine added her fifth point to leave it 0-06 to 0-01 at the break.

Lurgan were right back in the game in the first minute of the second-half as Eimear Corcoran finished off a good move with a well taken goal, 0-06 to 1-01.

Geraldine McLaughlin and Clara Lynch both added two points and then Aoife Brady made it a one point game, 0-08 to 1-04.

Lurgan had Laura Keogh sin binned for dissent but Emma Toland had them level with a good point.

Geraldine McLaughlin restored Termon’s lead yet again but they lost Aibhe McDaid to a yellow card and then keeper Corry, who otherwise was outstanding, misjudged Clara Lynch’s long high ball and Lurgan were ahead for the first time 2-05 to 0-09.

Lynch added a point from a free and the lead was three but Termon hit back immediately to regain the lead with a Ciara McGarvey point and then an excellent goal from Geraldine McLaughlin after Roisin McCafferty and Roisin Friel had combined to set her up , 1-10 to 2-06.

The lead was short lived however, Lurgan again responded to falling behind and were awarded a penalty after the once again opened the Termon defence.

Keeper Orla Corry blocked Clara Lynch’s first attempt but the forward followed up to shot home and Lurgan led by two in the 60th minute.

Geraldine McLaughlin brought her tally to 1-09 from a free to leave one in it but time ran out for the Termon girls and Lurgan’s goals won the day for them and a place in semifinals.

Disappointment for Termon but given the number of goals chances the Cavan girls created and despite only scoring one point from play, they will feel they just about deserved to take this victory.