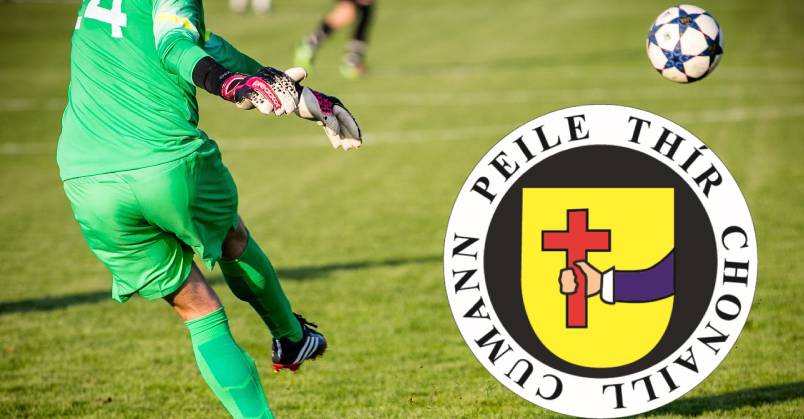 Results and reports from the Donegal League this weekend

On a very blustery day it was St Catherines who started the brighter, forcing two corners within the first five minutes of the game.

Drumbar did settle to have the better first half, coming close to taking the lead on several occasions, but unable to break the deadlock. The sides went into the half time break at 0-0.

The second half saw St Catherines come flying out of the traps and they were soon rewarded when Paul Murrin converted from six yards after St Catherines capitalised on a Drumbar defensive error.

St Catherines soon found themselves two up after another defensive error where a clearance effort bounced off a St Catherine’s attacker and found its way to the back of the net. 2-0 was how it ended in a very tight contest.

Cappry started the game well and had an early chance. The away side came into the game and scored in the 16th minute following a good move.

Cappry had chances to level but where caught on the break when Glenea won a penalty which they converted. The second half was delayed following a serious injury to Jamie Murray.

Following a long delay the second half resumed. Cappry got a goal back with 20 minutes left through Michael Carroll. Glenea wrapped up the points late on with a goal on the break.

The game opened at a frantic pace and Letterbarrow took the lead after 5 minutes when Lorcan O’ Donnell slammed home from the edge of the box after an exchange of passes with Gerard Mc Brearty.

O’ Donnell doubled his tally five minutes later with a fine solo effort that curled in off the post from outside the box. However, the visitors pulled a goal back two minutes later after a long throw into the box caught the home defence out and the ball was scrambled into the net by Tommy Diver from close range.

Both sides had further chances before Ryan Doherty slid in at the back post to slot home an excellent cross from Odhran Mc Neilis.

Both sides played good football at the start of the second half but it was Gweedore who got the vital breakthrough when a Tommy Diver’s long range effort found the back of the net. It was Tommy Diver again who made the game safe late on for the visitors when he headed home from a free kick.

Letterkenny Rovers got back to winning ways with a patient and disciplined performance which saw them defeat a dogged Drumkeen 3-0 at Leckview Park on Sunday afternoon.

Credit must be given to both sides for an entertaining spectacle in the testing conditions. A tame start to proceedings saw Tiernan Mc Cafferty’s shot for Drumkeen sting the hands of goalkeeper Blake Forkan but Rovers then assumed control with Patrick Gahir’s effort going just wide on 25 minutes.

Rovers took the lead on 27 minutes when Jordan Nugent fired home from the penalty spot after the lively Jack Dwyer was upended in the box. Danny Hall and Conor Temple had chances to add to the lead at the end of the first half but couldn’t find a way past Luke Mc Gee in the visitor’s goal.

Rovers though continued in similar vein and did double the lead on 62 when Nugent’s delicate chip from a difficult angle gave Mc Gee no chance.

Chris Malseed and David O’ Donnell both went close for Rovers while the dependable Malseed also denied a Drumkeen route back into the game when clearing on the line. Rovers saw the game out well and added to their lead with the last action of the game when Luke Parke fired home low to the corner.

Ballybofey started the game on the front foot and where rewarded on five minutes when Paul Kelly, who showed great determination to keep the ball in play, found Damien Glackin inside the 6-yard box to finish well. Lagan responded on 35 minutes when they were rewarded a penalty.

Ciaran Bonner got his finger tips to the ball but couldn’t keep it out. On 40 minutes Lagan got their second from a long throw-in which was headed into the corner of the net from 10 yards out. Lagan struck again on 50 minutes. It was four on 70 minutes when the striker slotted it past Bonner to make it 4-1.

Ballybofey got one back with 5 minutes to go when Caolan Marley was brought down by a high foot inside the box. Glackin stepped up and slotted it brilliantly into the corner of the net. Ballybofey pushed hard in the final minutes but where punished in injury time when Lagan got their 5th.

The game started off at a high intensity with both teams creating chances. Curragh nearly went one up in the 15th minute through Calvin Bradley but his effort was just wide.

Gweedore took the lead through Steven Mc Fadden in the 20th minute, a good finish from the edge of the box. The Gweedore keeper came to their rescue in the 30th minute when he saved Stephen John Carlin’s effort.

Fionnan Coyle doubled the Gweedore lead in the 45th minute when he broke away and finished well.

The second half played out with Curragh dominating but unable to score. Gweedore held out in the end to secure the three points. Adam Sweeney stood out for Curragh.  Ethan Harkin was immense at centre back for Gweedore.

Castlefin advanced to the next round of the Ulster Junior Cup after a hard-fought victory over Donegal Town. Castlefin controlled most the first half and took a two-goal lead in at the break.

A JP Malley tap-in and an Emmett White penalty were the scorers for the hosts. Donegal Town came out fighting in the second half and Joe Mc Intyre pulled one back but a Mark Lafferty strike put the hosts back in control.

Mark Jordan got Donegal back in the game to make it a nervy finish but the hosts held on to progress.

A hat-trick from Eddie O’ Reilly paved the way for Fanad United to progress to the next round of the Ulster Junior Cup with a 4-0 victory over Kilmacrennan Celtic at Traigh-a-Loch.

Fanad started the stronger and had their first chance in the 10th minute when Seimi Friel met a Darren Mc Elwaine free kick at the back post but his header forced Jimmy Mc Elwaine into a fine point blank save. Four minutes later John Sandilands produced a fine block to deny Patsy Friel a certain goal.

Fanad’s pressure paid off when they opened the scoring on 25 minutes. Left back Liam Mc Grenaghan floated a lovely cross to the edge of the box and Eddie O’Reilly rose highest to loop his header over Mc Elwaine. The goal sparked Kilmacrennan into life and they had several chances to equalise.

On the half hour mark Paul Bradley set up Kevin Kelly inside the box but his shot was well blocked by the Fanad defence. They then came agonisingly close to scoring when Daniel Mc Laughlin’s free kick from 30 yards crashed back off the Fanad post. Four minutes before the break Fanad got their second.

A Liam Mc Grenaghan corner was flicked on by Seimi Friel and Eddie O’Reilly was quickest to react and scored at the near post. The second half opened with Fanad applying more pressure. On 50 minutes Darren Mc Elwaine saw his free from out wide land just over the bar. On the hour mark Fanad got their 3rd.

Another Darren Mc Elwaine free caused panic in the Kilmacrennan box and when the ball broke to Eddie O’Reilly he finished low into the bottom corner to complete his hat-trick. Five minutes later Kilmacrennan were reduced to ten men when Chris Dillon received a second yellow card.

From the resulting free Jimmy Mc Elwaine produced a fine save at full stretch to deny Paddy Mc Ginley. Philip Buchanan did have a chance to pull a goal back for Kilmacrennan but he headed just wide from an excellent Paul Bradley Cross. With 15 minutes remaining Fanad got their 4th when a Darren Mc Elwaine ball into the box deceived the Kilmacrennan defence and the ball ended up in the bottle corner.  Referee: Gerard Devine

With only two minutes on the clock and we had our first goal. A simple cross from the right and Pearse Mc Carron found himself unmarked in the middle of the Saints’ box and dispatched a powerful header past the home keeper.

A superb move from the home team resulted in the equaliser on 8 minutes as lovely one touch football and a superb low drive from Evan Broderick saw the Clonmany Keeper well beaten low to his left and the scoreboard now read 1-1.

The visitors started to look more potent as the half progressed and their half time lead came from a corner on 30 minutes. The Saints’ defenders failed to deal with a low flighted ball that bounced around the box and eventually off a defending knee for an OG.

Shaun Kelly must have had stern words with his troops at half time as they played the second half like a different team and their dominance paid off on 80 minutes when Broderick got his second of the day with an easy finish at the back post after sterling work on the left from Ryan Cunningham.

The game moved into extra time at two apiece with both teams probing for the winner but never really testing either keeper. Vincent Mc Laughlin blew for full time and we moved to penalties.

Daniel Mullarkey superbly saved the first spot kick for the home team and this seemed to set the tone for the shot out as St Catherines dually dispatched all their remaining penalties to see off the Galant Clonmany effort as one more miss from the visitors saw the home team 4 -3 winners from the spot kicks.

Excellent performances in the centre of defence from Ryan Carr and Odhran Mc Guinness of St Catherines as they seemed to clear everything that came their way to keep their team in the game. The saints go marching on to the next round

Results and reports from the Donegal League this weekend was last modified: October 30th, 2022 by Staff Writer
FacebookTweetLinkedInPrint