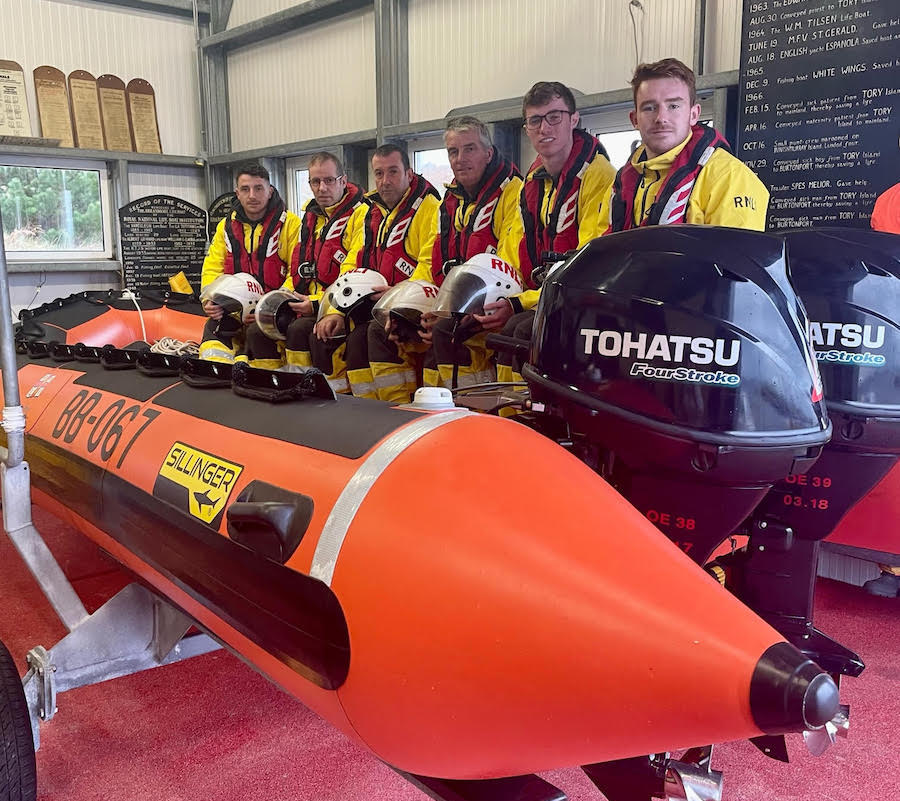 It’s all relative for lifesaving families of Arranmore’s RNLI

There’s no doubt that when it comes to the RNLI on Arranmore Island, a tradition of volunteering is in the blood.

The newest volunteer recruits to join the Arranmore RNLI, Joseph John O’Donnell and Brian Proctor will have two uncles, a father, and brother to show them the ropes.

Joesph John’s uncles, John and Michael McHugh are already seasoned volunteers on the lifeboat. John first joined the crew over forty years ago, then left Arranmore to work as a tunnel tiger before returning to the island permanently several years ago and immediately rejoined the RNLI crew.

He trained as a lifeboat mechanic, currently serving as relief mechanic and is now in training for his coxswain’s ticket.

Michael, known far and wide as Mickey Dubh, joined the crew two years ago following his retirement from the local fire brigade. Mickey is no stranger to community volunteering as he has literally broken a leg in the early eighties while involved in a twenty four hour football marathon to raise funds for the Leabgarrow National School.

He is also a volunteer driver with the voluntary ambulance service on Arranmore and served in a voluntary capacity with the island fire brigade. He trained as an electrician while living in America and is currently employed in the Community Centre and is a kayak instructor with Cumann na mBad on Arranmore.

Nephew of John and Mickey Dubh and new crew member, 18 year old Joseph John, known as JJ has just joined the crew and will continue with his competence-based training in all the skills involved in saving lives at sea.

JJ is in the final year of second level education at Gairmscoil Mhic Diarmada on Arranmore and hopes to train to become a woodwork teacher.

JJ said “I love the sea and I’m involved in swimming, kayaking, lifesaving and all sea-faring activities and I suppose it was inevitable that the next step was joining the RNLI.”

JJ’s uncle John said “Of course we are delighted that JJ has joined the crew, it is really important for the continuity of this vital lifesaving service, which has been in Arranmore since 1883.

“Families have always been very much involved in crewing the various lifeboats on the island and we certainly encourage younger people to join the crew; the training involved gives the crew life skills which they can carry with them throughout their lives and is also a great experience in building team work.”

John remembers his first call out on the lifeboat forty odd years ago, not for what the call was but that he received a cheque for £8 a small gratuity for going out on the lifeboat emergency call. He was so delighted with the cheque that he never cashed it, instead cherishing it as a keepsake.

Brian Proctor junior, like JJ, has just joined the crew and has the advantage of having his father, Brian, his brother, Martin and his uncle, Anthony to show him the art of lifesaving on the lifeboat.

Brian has just graduated from the ATU, Galway with a Bachelors Degree in Sports and Exercise and plans to undertake a Masters in teaching and learning. His father, Brian senior, has been on the crew for over forty years and like John Mc Hugh was a tunnel tiger until his return to Arranmore.

Brian said that having both his sons on the crew was a source of great pride to him.

He said “Being islanders I think we have the sea in our veins, no matter which direction we look the sea is all around us. We are very privileged to have the lifeboat here and it is great to see the tradition of volunteering being continued down the generations in families”.

His son, Martin is no stranger to boats having graduated as a marine engineer from the Maritime College in Cork. Martin is second mechanic on cruise ships travelling all over the world and plans to continue studying to gain a first mechanics degree. Martin joined the crew eight years ago and in between cruises comes back to Arranmore to join his family and the lifeboat crew.

Both John and Brian senior have been on many call outs on the lifeboat, some calls where they saved lives and others with sad outcomes.

Like many lifeboat crews they are reluctant to talk about the lives lost to the sea and when asked about their most challenging calls both mentioned the rescue of a fishing trawler in difficulty off Malin Head in 2019, a rescue involving three lifeboats.

Weather conditions at the time were force 11 gales and with heavy seas. The Arranmore RNLI towed the trawler to calmer waters in Lough Swilly where the Lough Swilly RNLI Shannon Class Lifeboat towed the trawler to the safety of Buncrana harbour. The lifeboat was out for 15 hours on the call and both John and Brian paid tribute to their flanking station crews, Lough Swilly and Portrush RNLI and of course the Coastguard from Belfast and the Malin Head Coast Guard who coordinated the rescue.

Arranmore RNLI press officer, Nora Flanagan paid tribute to all lifeboat crews and especially the Arranmore lifeboat, which she volunteered on for many years.

She added “I am so privileged to be part of this lifeboat station and want to tell the story of how these families are always contributing to the welfare of the whole community on both land and sea. We usually refer to the volunteers who serve on the lifeboats as “ordinary people doing extraordinary things” but I believe they are truly extraordinary people doing the most extraordinary things helping to save lives at sea, on lakes and on land. Thank you all for your selfless dedication.”