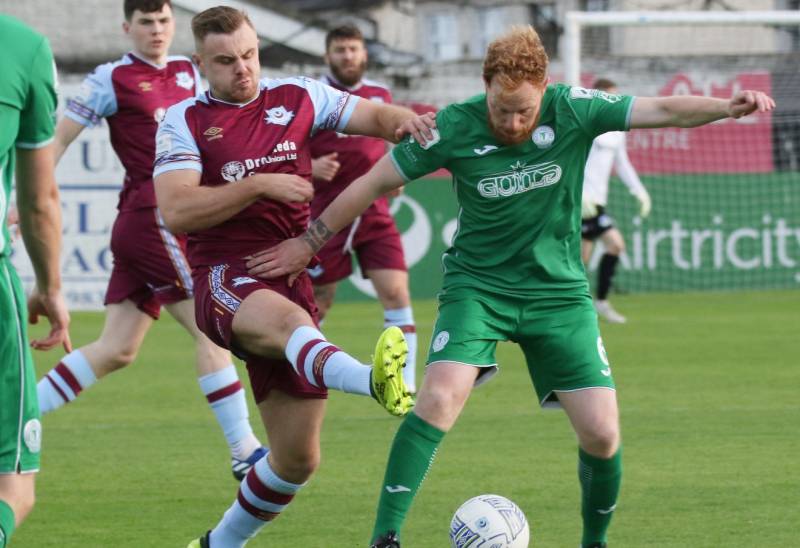 Finn Harps ended their season in disappointing fashion as they were defeated 2-0 by Drogheda United.

Darragh Markey gave Drogheda the lead after just five minutes and Dayle Rooney confirmed the victory in the last minutes of normal time at Head in the Game Park.

Kevin Doherty meanwhile made three changes from Drogheda’s 6-0 hammering by Shelbourne, with Emre Topcu dropping to the bench, while Chris Lyons and Colin McCabe missed out through injury, being replaced by Darragh Noone, Gary Deegan, and the debutant Lee Steacy.

And it took just five minutes for Drogheda to open the scoring when Darragh Noone’s cross fell to Markey at the back post who curled into corner.

Dylan Grimes found Rooney five minutes later but he tried to play in Ryan Brennan with McKeown off line and Brennan missed.

Darragh Nugent then had two chances, first when he cut in and fired just wide, then his shot outside the box was easily saved by McKeown.

Luke Rudden almost caught out the debuting Steacy as he picked the ball up on the halfway line and shot but his shot went goes inches wide with Steacy scrambling back.

Substitute Emre Topcu’s turn and shot on half-time was saved by McKeown who got down quick.

Drogheda kept pushing for the second goal and if it wasn’t for Filip Mihaljević, it would have been two, as he cleared Keith Cowan’s header off the line.

Harps then had a couple of chances of their own around the hour mark with a Rainey volley deflecting wide, while Boyle’s cross almost caught Steacy out who had to palm the ball away and Luke Rudden’s header went wayward.

It was Drogheda’s turn to have a couple of chances again and Markey hit the woodwork after a lovely dummy from Brennan, while Slevin headed a Markey shot that looked goal bound away.

With 10 minutes to go it was almost 2-0 again as Noone played in Nugent and he fired the ball across McKeown and off the inside of the post and out of play.

McKeown stopped Drogheda getting a second late on as Nugent again threatened and his effort was curling into the bottom corner but McKeown got a hand to it.

Just twenty second left of normal time, Drogheda would finally get their second as Rooney played a 1-2 with Topcu before aiming for the top corner and McKeown got a hand to it but couldn’t keep it out.

Added time provided no further chances as Finn Harps end a disappointing season with another loss as they look to focus on returning to the Premier Division in 2023.