We were all up in the good sitting room on Saturday evening, an old tradition remembered from the past when visitors were calling.

This was our 50th birthday year, us being the Donegal International Rally. Our good sitting room was the Mt. Errigal Hotel.

We had a full house of visitors in the form of the Irish Rally Tarmac Championship 2022 awards night who made the trip up to Donegal.

Sometimes it’s hard to recognise the drivers when they’re not in the cars that you saw them in action with over the past year, or them doing a live interview at the end of a stage through a helmet or fireproof balaclava or their hair flattened as they catch their breath.

The OMP rally suits were replaced with waistcoats and evening wear as guests purposefully made their way up the ramp at the front door of the Mt Errigal Hotel.

They didn’t need notes but it could have read: ‘Flat past reception, through double doors,

As the guests took their seats in the refurbished Derryveagh Function Room, the familiar voice of Oisin Kelly, the voice on the radio reporting on rally stages, and MC at finish of the Donegal International Rally back in June, was on a different stage for the evening as he made his way through the many class awards in the many very many parts that all go to make a championship from the year that has passed.

Everyone was there, from the Clerks of the course from all the events that make up the IRTC calendar, all made their way up to Donegal at the weekend to be presented and recognised for the effort they and their teams of officials put in over the year.

Sitting in the function room, memories of the many rally teams taking part in the championships over the years that all took a trip up to Donegal came up.

Back as far as the days when the hotel was called the Ballyraine Hotel, with the Parc Ferme up at back of the hotel in a very special field where the cars of their days flattened the grass as they parked up along the hedge, and the stars of the day mixed with the spectators on sunny summer evenings.

Moving on a few generations and the stars of the future step up on to the stage to collect their award.

McHugh’s of Frosses, Joe and Dermot, were big names in the eighties in Chevettes and escorts and now it was Ryan the nephew who is making the news. 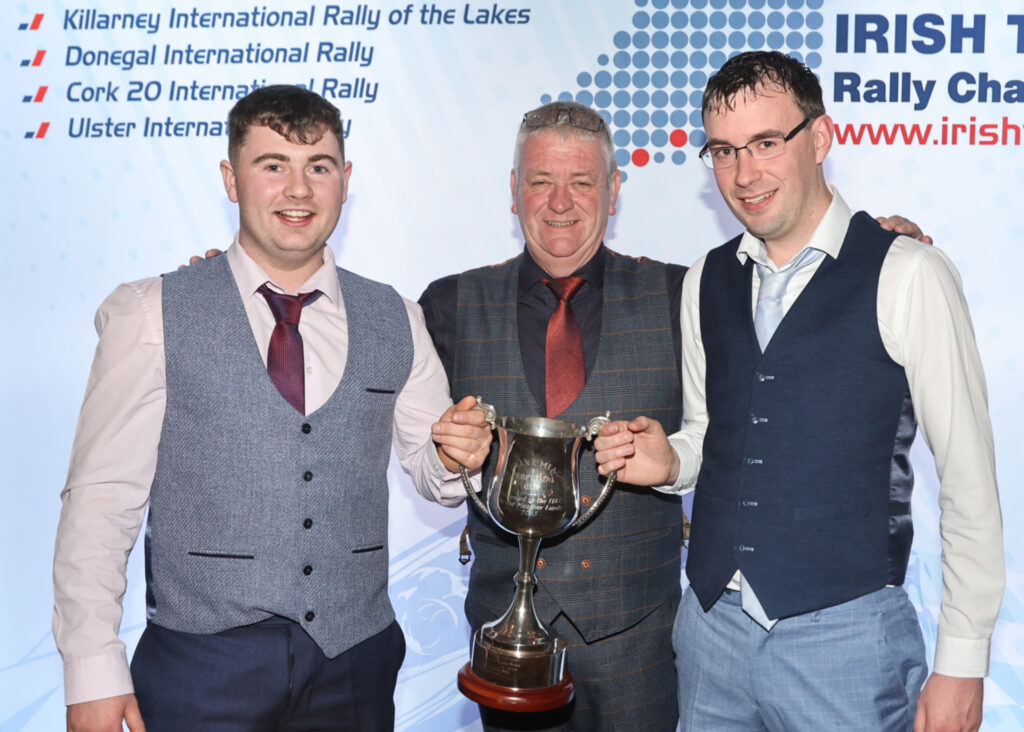 He is the Irish Tarmac Junior champion, him and Declan Boyle, two young Donegal competitors taking the laurels to Donegal and are presented with a very special cup in memory of one of Ireland’s best rally drivers, Frank Meagher.

If there’s one thing that was positive about the lockdown over the last few years, it was how families put more values in the  things that they always dreamed of doing but always put them off to that far off ‘right time’ and 2022 was the year for getting out and making dreams come true.

There were so many father and son stories and daughter and father stories at the prize giving on that Saturday night.

The Carty father and son from Bundoran, Iarla and Jason, winning in the historical class, Andrew Nesbitt’s navigator James O’Brien and his daughter Grace followed in her fathers famous footsteps stepping up on to the stage at the Mt. Errigal to collect her award. 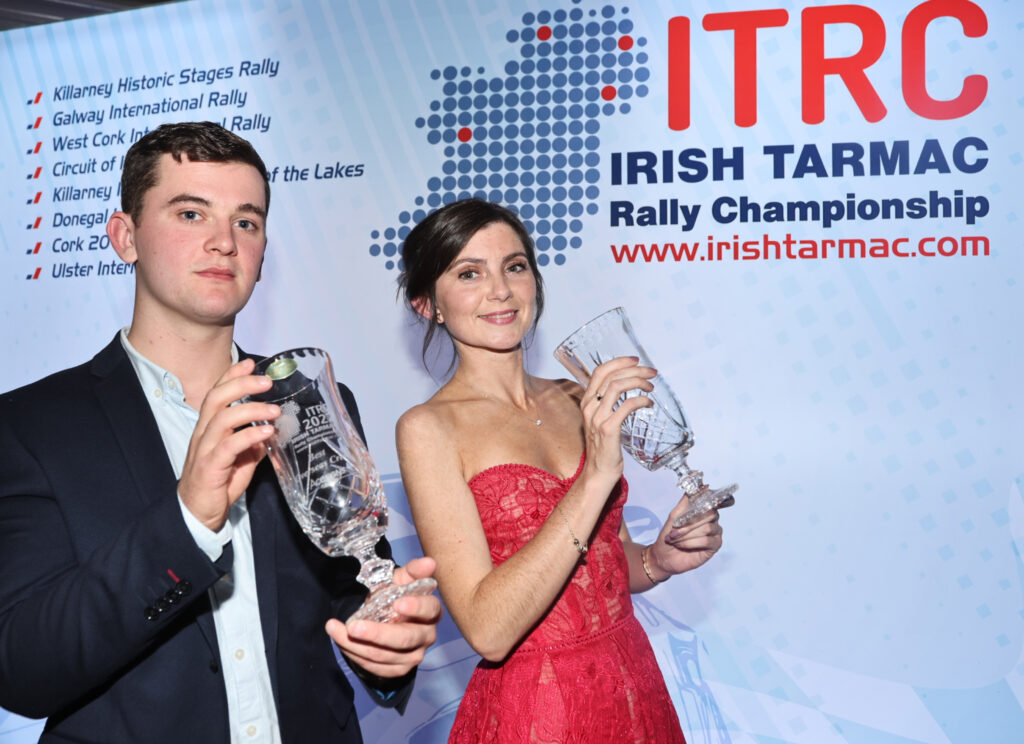 Ryan Caldwell Straabane and Grace O Brian Winner of the best Mixed Crew at the ITRC awards in the Mt Errigal Hotel.

Young Ben Walsh got the biggest local cheer when he was called up to collect a national award in his very first year of rallying. His family were there including aunties, his grandmother Josephine and of course very proud siblings and parents, especially his father Mac. 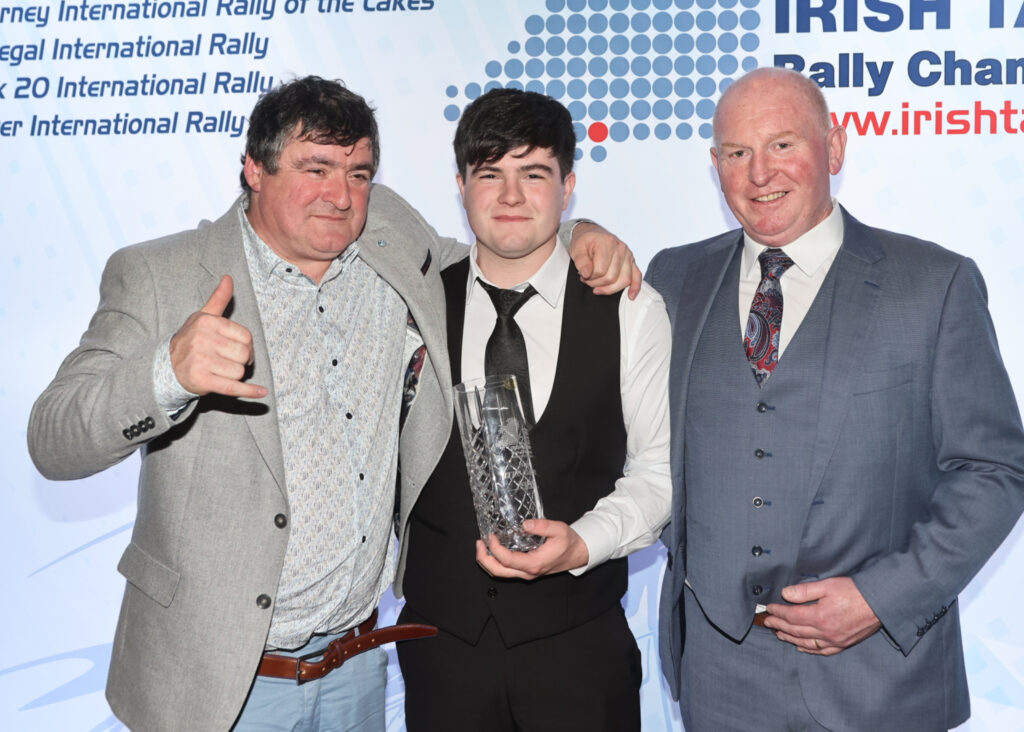 Back in February I watched young Walsh on a very wet Galway Rally where he got a difficult winter rally under his belt. His effort on his first year rallying and a national class win in the modified are signs of a very promising rallying career.

There were many that travelled a good distance to attend the prize giving on Saturday night, some even coming across the Irish Sea from Wales to receive their awards. 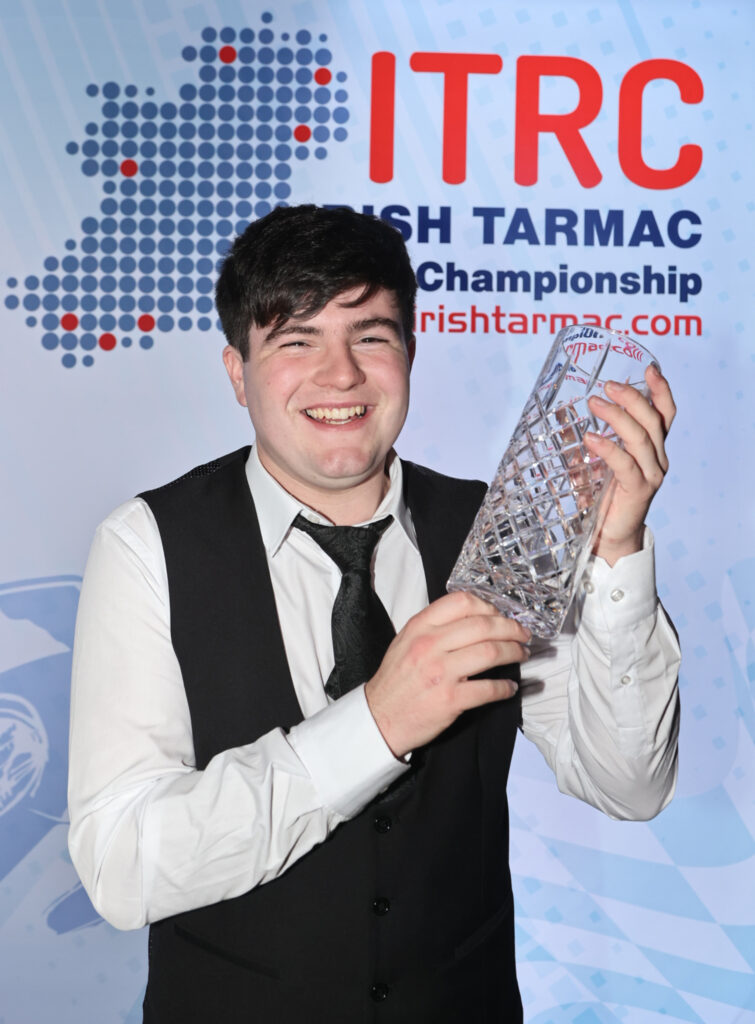 Merion Evans with Jonathan Jackson, one of the top names in Irish rallying along with Alastair Fisher and Calum Devine, all runners up for the top honours, all made an evening of it with their families and the support teams to receive their awards.

These boys have all brought back the magic to rallying, bigger and better, coming out of lockdown.

Overall winner and the final call up on the stage on Saturday night was the overall winner of the Irish Tarmac Championship, Josh Moffett and navigator Andy Hayes.

What a year it has been for this man and no better man having won the Donegal back in June, to be returning in November to collect more silverware as tarmac champion as the IRTC hosted their prize giving up in Donegal to help celebrate the club’s 50th birthday of their home event.

Back in June, the Moffetts made a bit of history by becoming the first brothers to finish 1st and 2nd overall on the Donegal Rally, and the year before the lockdown it was Sam who won Donegal in 2019.

Both of their names are etched on a very special cup, the Jim Kennedy Memorial Cup, which will always remind us of Jim and past friends like Jim that made the Donegal and rallying very special through their endless efforts.

As things work out there was a great rallying and family connection for the overall award in the championship when Jim Kennedy’s son stepped up on to that stage to present the Tarmac Champion with the Bertie Fisher Memorial Cup to Josh Moffett. 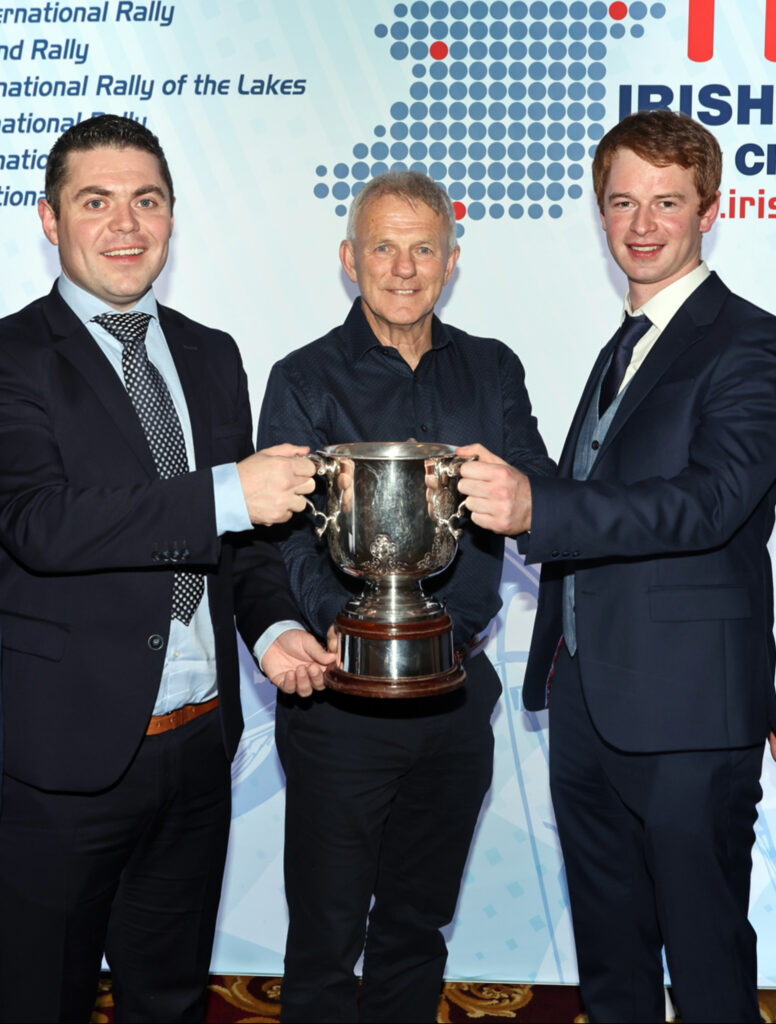 Rory Kennedy presents the Bertie Fisher Memorial Trophy with over all champions Josh Moffett and Andy Hayes at the ITRC awards at the Mt Errigal Hotel. Photo Brian McDaid.

Rory Kennedy was the late Bertie Fisher’s navigator, one of the great all time rally drivers that Donegal called their own come June in Donegal.

The Moffetts were there in full force, Josh with his older brother Sam and the family took up table 6 in the Mt. Errigal at the packed function room.

It was a very classy night that also had a lot of nostalgia thanks to past winners like Andrew Nesbitt who took to the stage to chat about his hay days in the Subaru, where he talked about a man travelling to England with a box small enough to carry a set of cufflinks that carried a very special tuning component that had the great Colin McRea name printed on.

It was used on his famous 555 Subarus that turned up the wick so far on his Cuisine de France Subaru, the engine in Andrew Nesbitt’s car had to be rebuilt at the end of every rally. And then there was the Mac, Seamus Mc Gettigan who mixed with the best on the night, didn’t need no chip to turn the wick up on his wit. 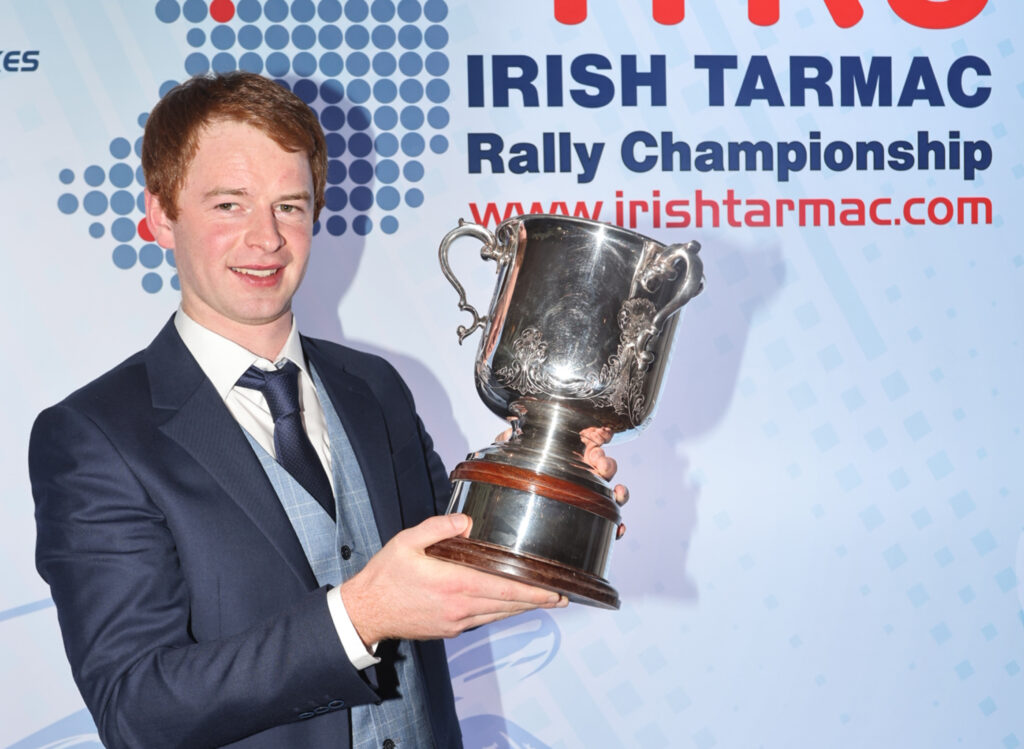 Josh Moffett ended a great 2022 championship with his overall win but in accepting his award he let the competitors on the night know that it’s not over yet and hinted that his brother Sam’s car was due for a change for 2023.

As we go to print I couldn’t help but notice a post up on Sam Moffett Facebook page this week putting his WRC fiesta up for sale which read:

Available with both Tarmac & Gravel setup.

Chassis #038 has had all major rebuilds

prior to competing in Donegal this year.

Here’s to looking forward to another season in 2023 and congratulations to all who competed in the championship in the year that has passed.