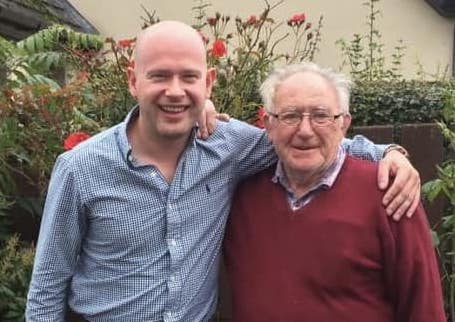 Charlie passed away at his home surrounded by his loving family.

He will be lovingly missed by his wife Monica, his daughters and sons Margaret, Anne, Gillian, Stephen, Michael and Declan, sons-in-law, daughters-in-law, 11 grandchildren. Sadly missed by his brothers John, James, Frankie and Gabriel and all his extended family and friends. Predeceased by his sister Mary McCollum.

Among the many tributes paid to Charlie was one by fellow musician Matt McGranghan.

“Your contribution to music was immense.
I learned more from Charlie about music than almost anyone. What I learned from Charlie wasn’t about notes or rhythms or tunes – it was about the fun and joy of music.
The joy it brings to others but more importantly, the joy it brings to ourselves as musicians.
Charlie was always in great form.
He always had a one-liner or witty comeback and mostly it was at his expense.
He made himself the punchline. Never offended or tried to offend anyone.
In my 30+ years of music Charlie was always there.
It started with house sessions.
He started the weekly sessions in the Gateway on a Thursday, then Ballindrait on a Friday and then he was the central figure in the Diamond Bar sessions in Raphoe which has recently celebrated 25 years in existence. He rarely missed the Wednesday night session in McElhinney’s house either.
Charlie played trad, and bluegrass and country fiddle. He loved the great players like McGuire and Hunter.
He had a beautiful confidence in his own playing and ability.
I learned from him that it’s important to have that confidence in your own playing.
When Charlie played a tune he put every fibre of his being into it. He played every jig, reel or air with as much emotion and passion as anyone I’ve ever met or heard.
THAT is what made Charlie so damn special.
Every musician could learn from Charlie. His enthusiasm, passion and joy for music, for playing it, for sharing it is something we can all learn from Charlie.
To top it all off, he was an amazing family man. He thought the world of Monica, his children and grand children and in turn they thought the world of him. They minded him always like a cracked egg.
Rest in peace Charlie.
Thank you for all the tunes, the nights of music, the laughs.
Thank you for your infectious and loveable character.
Thank you for sharing your passion and life with us all.
Thank you to Monica and your family for sharing you with us all.
Your life brought so much joy to so many people.
Every time I think of you Charlie I smile.
Even the thought of you brings happiness.
Thank you Charlie.
Ar dheis Dé go raibh a anam uasal.