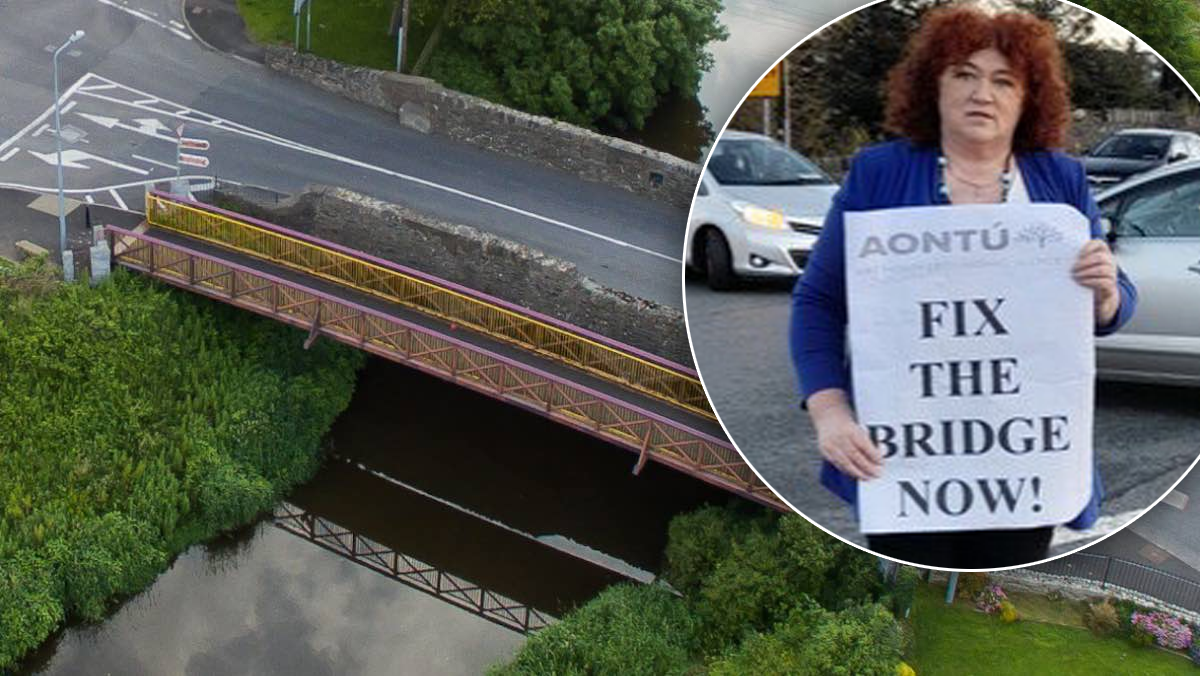 ‘A helicopter would be only way around Letterkenny during rush hour’ – Mary T. Sweeney

Donegal Aontú Rep Mary T. Sweeney has called for Letterkenny’s road problems to be addressed as a matter of urgency.

Ms Sweeney, who ran in the last local and general elections, says that traffic gridlock in Letterkenny and never-ending road works have a potential detriment to trade in the town.

“For too long Letterkenny has put up with an inadequate road infrastructure system, and a long-standing proposal for a link over the River Swilly from Ballyraine to Bonagee to relieve congestion has failed to materialise. In fact, traffic-flow is now so slow that the only efficient mode of transport to get around town during rush hour would be by helicopter!,” she said.

Ms Sweeney highlighted one area in particular as needing urgent works – the Oldtown Bridge. As the local population grows, and so does traffic volume, Mrs Sweeney said the bridge is eroding in plain sight.

She said: “The Oldtown Bridge is carrying much of the diverted traffic across the river at the bottom end of Letterkenny. Due to tailbacks, heavy freight vehicles and buses frequently have to sit on the centre of the bridge causing extra stress on the structure.

“The upper part of the bridge is now clearly damaged with visible cracks in the stonework. Capstones on top were knocked off at least six months ago and no effort has been made to repair them.

“Also one arch of this three-arched bridge is totally blocked by debris. This is putting additional pressure on the two supporting piers and escalating erosion of the foundations and banks of the River Swilly.”

“Three years ago Aontú held a Public Meeting to allow local residents to raise their concerns about the deteriorating condition and traffic bottleneck at the Oldtown Bridge. This was well attended by all political parties,” she said.

However Ms Sweeney stated there has been no satisfactory response, despite participating in a presentation to Donegal County Council in October 2019 regarding the bridge.

“Since then, there has been substantial growth in the population on the Oldtown side of the Swilly due to construction of new housing estates. As the Aontú Rep for Donegal I am calling on the Council to immediately allocate funding towards the urgent upgrade of the Oldtown Bridge.

“This centuries-old bridge cannot bear the burden of modern freight and traffic. I have genuine fears there could be a sudden collapse. Please let’s fix the bridge now before we have a tragedy on our hands.”

She also highlighted the need to give proper recognition to Oldtown Bridge’s historical significance and the potential to develop the immediate neighbourhood as a tourist attraction.

“I’m asking Donegal County Council to consider commissioning a sculpture to remember the Gaelic chieftains O’Donnell and O’Neill and their followers who crossed here in 1607, en route to Rathmullan where they departed Ireland’s shores to avoid the clutches of a hostile Crown—a historical event forever known as The Flight of the Earls. Back then, this vicinity was the main gateway from the south of Ireland into North Donegal.”

Ms Sweeney added: “Furthermore, we should never forget the 53 native Irish who suffered execution by drowning at Oldtown Bridge during the 1641 Rebellion. This ghastly local affair was mentioned in Westminster by The Great Liberator Daniel O’Connell when he presented a dossier of such atrocities against the native Irish.”

“We mustn’t turn our backs on development of the River Swilly in our town. The erection of a sculpture reflecting our history would be a fantastic centrepiece for the streetscape of the Oldtown area and a catalyst for further improvements.

“The idea of a waterfront development has been muted in the Letterkenny Town plan as far back as 2009. Why has it not happened? It seems the current crop of councillors is showing no real drive to push through good ideas that would benefit the Oldtown area,” concluded the Aontú local election candidate hopeful.

‘A helicopter would be only way around Letterkenny during rush hour’ – Mary T. Sweeney was last modified: November 19th, 2022 by Rachel McLaughlin
FacebookTweetLinkedInPrint