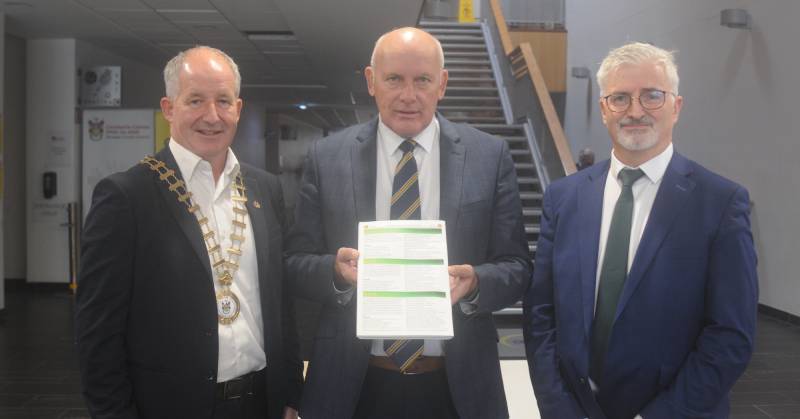 The final day that the Donegal Sports Star Committee will be taking nominations for the 2022 Awards is this coming Friday the 25th of November.

Once again the Awards are being sponsored by Donegal County Council. The Council’s Cathaoirleach Cllr Liam Blaney and Chief Executive John McLaughlin are encouraging sporting organisations to nominate those who have achieved in 2022 while also acknowledging people who work on a voluntary basis to ensure that sport can prosper in local communities.

Cllr Blaney said that sport played a huge role in the lives of Donegal people. “I know how important sport is in my own area of Fanad and Milford and it’s the same throughout the whole County.

“As Cathaoirleach I am so happy to see Donegal County Council continue to sponsor the Awards. There have been lots of good things happening in sport this year so it’s important that the nominations come in by this Friday 25th of November,” Cllr Blaney said.

John McLaughlin, the Chief Executive of Donegal County Council, is delighted that the Donegal Sports Star Awards is on track for its first live event in three years following Covid.

“The Sports Star Committee had to hold the Awards remotely the last two years due to Covid so it’s great to see them planning for a live event at the end of January. The Council is really pleased to be the sponsor again as sport is something that really brings people together. It’s an excellent form of recreation both physically and mentally. Whether you are playing, coaching, managing or supporting  it is great to be involved” Mr McLaughlin said.

It’s been the first full year of competitions following Covid and Awards Chairperson Grace Boyle is asking sporting organisations with significant achievements either as teams or individuals to submit nominations by this Friday.

Nominations can be made online by going to donegalsportsstarawards.ie or by posting to Donegal Sports Star Awards, c/o Post Office, Ramelton. Shortlisting may apply in regard to nominations that are submitted.