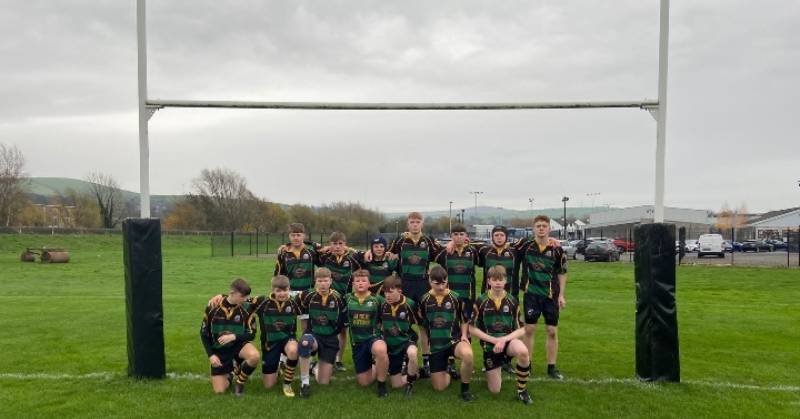 The morning was silent with dew on the grounds on Brandley Way but this peacefulness wasn’t to last as the lads from Strabane v Finn Valley /Letterkenny were waiting to show off some great rugby.

Finn valley knew too well, the style and physical challenge Strabane bring to a game, unfortunately due to injuries and the flu season, Finn valley were down on players. But John Burke’s Letterkenny lads were on hand to help to ensure the fixture took place. From the start Finn Valley/L.K got straight down to work.

In the early minutes of the match, Finn Valley/L.K opened the scoring with breath-taking mix of great ball handling and force to push Strabane back to their own try line. The restart Finn Valley/L.K again rose to the challenge and crashed over with a swift move, from Cathal ‘the Sparkys’ McFadden who scored the try.

Strabane got their chance sprinting up the field  getting so close but running into a wall of defence which was led by  Matthew Marrow, Luke McGee and Conor Kilpatrick,  watched by their Captain Aaron Sweeney who made sure everyone knew the mission for this match.

A penalty for not releasing from Finn Valley/L.K. gave the home side an opportunity to score and they did. Both sides gave so much, great effort in the runs, and great displays of rucks time and again. Finn Valley/Letterkennys combination in scrums and lineouts show great team spirit of strength and teamwork for lads who only met an hour before kick-off.

The game opened up to a fair contest but the little extra push from experienced Strabane showed on their runs which helped them to overcome the pressure from our combined team.

The second half showed even more great runs from both sets of forwards especially with Matt Marrow and Luke McGee setting up the backs, but Strabane defence was waiting for the attack, each team emptied their tanks with so much determination and desire.

Strabane extended their lead but the Donegal lads didn’t stop trying. A line break was created and off they went with great force and with display of teamwork, the boys scored a try which give them new hope but unfortunately time on the clock was running down and final whistle was ready to echo the air, with Strabane taking the win 36 -26. 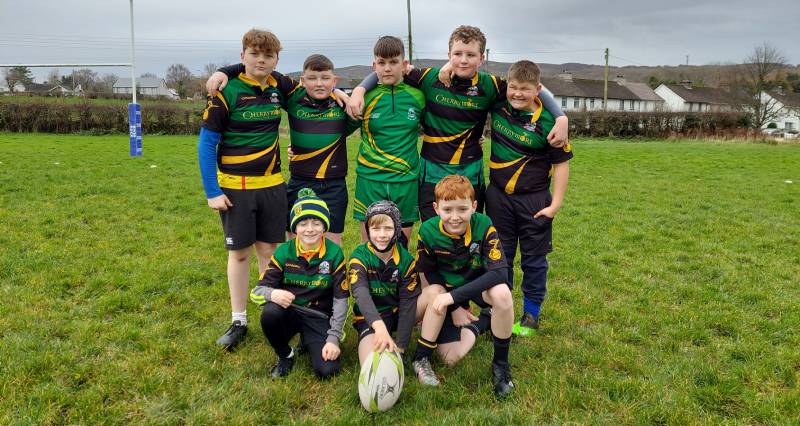 The Finn Valley Boys travelled to Carndonagh to take Part in a county blitz at Inishowen RFC. The U12s Boys started strongly with Jack Blee and Ruari Irwin powering through for a brace of tries in quick succession. Donegal Town struck back with a well worked pass out to their wing for a try in the corner.

Again, Finn Valley piled on the pressure from the kick-off and with skilful passing got the ball out to Aaron Porter who broke through the Donegal defence to cross the Whitewash! Not Long afterwards the Finn Valley Lads drove up the field putting Donegal on the back foot and the ever-alert winger Louis McGee spotting a gap to crash through.

Donegal managed to Score again with some deft handling to touch down. However, FV weren’t finished by any means and added another few tries through Jamie Laverty, Jonathan Rhys Parke and Tajus Kasparaviciene.

It was a similar picture in the next couple of games against Inishowen and Ballyshannon with the Finn Valley Boys working hard as a team to grind out wins in both games. However, the final game against the second Donegal Town team was a tight affair.

The F.V lads were under pressure from the Kick-off and a couple of players had picked up slight injuries. Donegal were first to strike with a well worked try. Ruari Irwin again led the charge at the Donegal defence to break through and score. Donegal came straight back at the Finn Valley boys to edge ahead.

Jonathan Rhys Parke worked like a warrior at the next breakdown to turn the ball over as he had done all through the previous games. Finn Valley’s Jack Blee adding another score.

Donegal not to be outdone replied with two tries in quick succession and really put it up to our boys. Aaron Porter stepped up to the challenge and scythed through Donegal offloading to Jamie Laverty to again bring the game to a single score.

With time running out FV won a penalty and Ruari Irwin duly obliged ran in the final try to level the game. Fantastic rugby by all teams on the day. The Finn Valley club wished to thank all at Inishowen RFC for their hospitality, especially Brian Keogh for organising the blitz!

The under 10s were low on numbers but that didn’t stop them from playing some great rugby. After a rusty few minute, the boys got their first try, this was caused by great passing and teamwork.

The boys put in some impressive tackles; the training is starting to show on the boys. The boys got congratulated on a passage of play that they strung together just missing out on the try but seeing that play was better than any try. Overall was a great morning of rugby