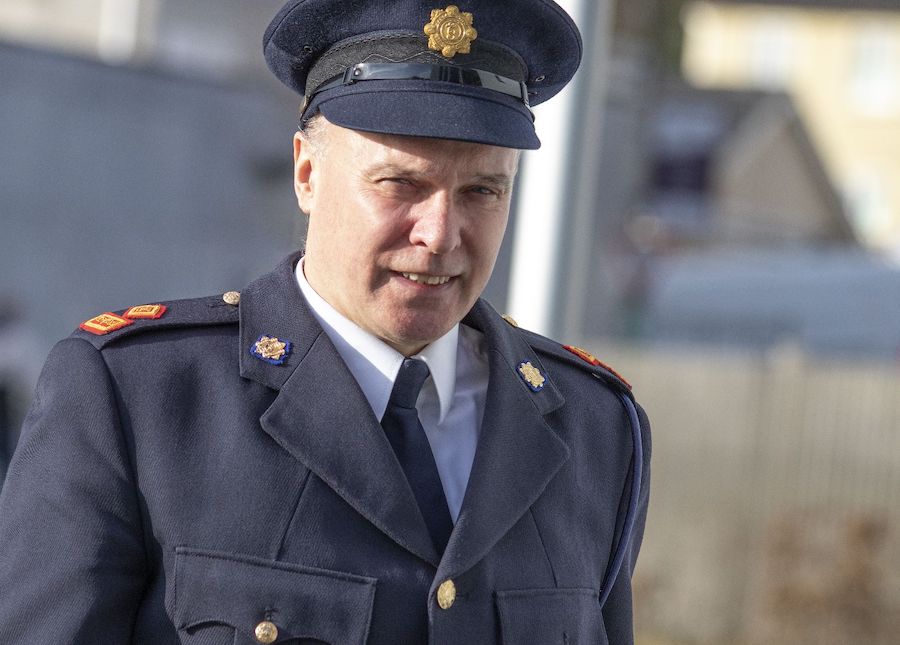 One of Donegal’s most senior Gardai is to have a quieter-than-normal Christmas when he retires in the coming days.

Superintendent Michael Finan will become the latest senior member of An Garda Siochana in Donegal to retire from the force locally.

Superintendent Finan (pictured above by Joe Boland) will leave the force on Christmas Eve after 40 years of service – most of which he spent in Donegal.

A native of Sligo, Superintendent Finan was first posted as a Garda to Muff. He served in several Garda stations in Donegal, both as a Garda and a Sergeant, while he also spent time working in Kevin Street and Sligo stations.

He was appointed as an Inspector in Glenties in 2009 before being appointed as a Superintendent in the Letterkenny Garda District in 2014.

Tributes, paid at Letterkenny District Court on Tuesday, were led by Judge Éiteáin Cunningham, who said Superintendent Finan was retiring after ’40 dedicated years of service.

“I only had the pleasure of meeting him on one occasion, but it is fair to say that his reputation precedes him,” Judge Cunningham said.

“Throughout his many years in Donegal, Superintendent Finan has acted at all times acted independently and in a manner that respects the rights of every citizen.

“He believed in regular interaction with all the relevant stakeholders and was a strong advocate of community policing in rural and urban settings.”

Judge Cunningham said Superintendent Finan had ‘strengthened the trust of communities’ and wished he and his wife Anne Marie a happy retirement.

Mr Dorrian said: “Firm, but fair would be the watchword of Michael Finan’s career in the force. He is unusual in that he reached the rank of Superintendent with fans and no critics.”

“When we moved here to the new courthouse in 2018, Superintendent Finan was very proactive in his approach,” Mr McGonagle said.

“He helped with the smooth running of the custody area on busy Mondays.

The tributes were echoed by court presenter Sergeant Jim Collins.

“I would like to wish the boss man a long, happy and healthy retirement,” Sergeant Collins said.

“He is a gentleman and has always been firm, but fair. He led the way and always was at the forefront.”

Superintendent Finan said his 40 years in the force have ‘flown in’.

He recalled the ‘trepidation’ of his first court case after being stationed in Muff and how that feeling was ‘added to enormously’ when he realised he was facing the renowned solicitor Paudge Dorrian.

Superintendent Finan outlined his respect for those in the legal profession.

“They don’t have an easy task,” he said. “Fair-minded is one way to describe each and every one. Any young Garda who cuts his teeth in court in Donegal would be ready for any court.”

Superintendent Finan obtained a law degree himself from NUI Galway.

He praised the Courts Service staff and the Probation Service whose work, he said, was ‘often unrecognised’.

The Judges who have sat on the bench in Donegal during his time had all been ‘fair and interested in dispensing justice in very difficult circumstances a lot of the time.’

Judge Cunningham, who took up her post as Donegal’s District Court Judge in June had already ‘proved an excellent judge’.

Superintendent Finan thanked those who passed on well wishes and added: “I’ll have to find some hobbies now.”