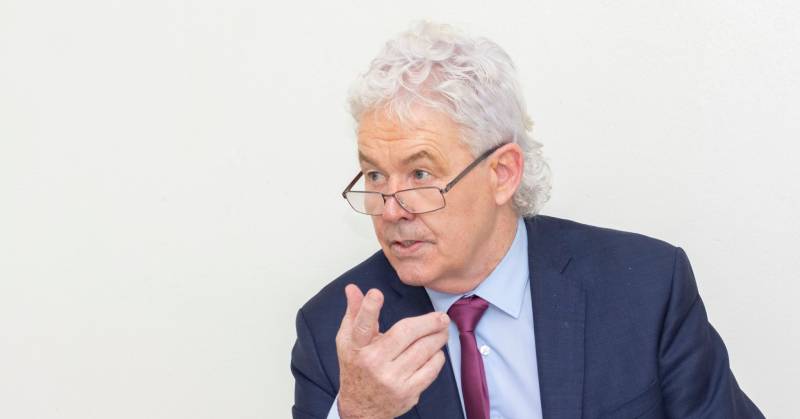 Paddy Carr has called for the Sigerson Cup and other college competitions to be played before Christmas to avoid heavy fixture congestion.

The Donegal manager called it ‘ridiculous’ about the amount of games young players trying to break in to the county squads have to play around this time of year.

With the Sigerson Cup starting in January at the same time of the McKenna Cup, Carr believes it stops some young players from getting their chance to step up for their county due to other commitments.

And with the Donegal Under-21 A knockout stages being delayed until after Christmas, some players faced the prospect of playing in three different competitions for three different teams.

“I think the college competition should be played before Christmas,” Carr said.

“There was a ridiculous situation that developed there between the Under-21 competition in the county, with the knockout stage being played after Christmas.

Some young lads were involved in three teams, you could have players playing five games in seven days and that’s not acceptable, we couldn’t play those lads and it’s really too much.”

Carr said the fixture congestion gave him a dilemma when it came to team selection, and knows he wasn’t the only manager in that situation.

“If you ask anyone in my situation they’ll tell you the same,” he added.

“The overload on players at the moment is really tricky and any game we’ve went into, whether it was McKenna Cup games or other games, and we did play a couple other games as well, we had to re-jig teams almost at the eleventh hour simply because of factors that are outside of control.

“The reality is that this time of the year is the only time that the inter-county teams can give young lads the opportunity to stake a place and make that big step up to county football.

Carr also acknowledges that for many of these young players, they are trying to balance their football between county, inter-county and college, and most importantly with their own career and studies.

“At the same time they’re very committed to their colleges, they’re young lads and then you have to be very cognisant of the fact that pre-Christmas and post-Christmas a lot of these lads, their careers are on the line in terms of examinations and everything else so there’s a huge amount of moving parts to any inter- county squad at this particular time of the year.

“The top team in all four divisions have a significant amount of players in their squads caught up in third level because the profile of an inter-county footballer is becoming younger and younger.

“You don’t see too many lads who are raring families and are committed because at this stage you see even the retirement age of some inter county footballers is coming down all the time and that’s because of the pressures on them.”

“These lads are doing 24/7 they’re working in function of making themselves the best version possible. They’re doing very early morning gym sessions, they’re here 3/4 nights a week. The is no real downtime for them and for a young lad trying to come into a squad like that.

“I think the powers that be at Croke Park were trying to do this for a good reason, to give space for the club championship but the same players are being sed in every situation.”

Carr has recognised however that Donegal’s situation has been extreme due to the weather, between the Under-21 call offs before Christmas and ATU Donegal’s Sigerson games, one of which against UUJ was postponed three times before finally being played on Sunday.

This has also affected his preparation with pitches in the county being frozen over for the last near on fortnight.

“Obviously like the situation with ATU last week (was different) with the weather, and I’ve been travelling up and down the country and the weather is very different in different places.

“Other teams down the country, the weather hasn’t affected them and we couldn’t do any outdoor activity last week, that didn’t mean that work wasn’t done, certainly.”

Carr calls for Sigerson to be played before Christmas to avoid another ‘ridiculous situation’ was last modified: January 25th, 2023 by Dáire Bonnar
FacebookTweetLinkedInPrint