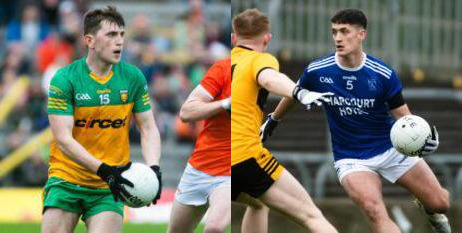 Shane O’Donnell and Ethan O’Donnell will be not involved with the Donegal panel while manager Paddy Carr will have talks with Peadar Mogan over returning to a side full of injuries ahead of their League opener.

Donegal take on All-Ireland champions Kerry in the Allianz Division 1 this Sunday in Mac Cumhaill Park, and with plenty of injuries in the squad, he confirmed that Ethan O’Donnell and Shane O’Donnell will not be part of the panel.

Oisin Gallen, Ciaran Thompson, Michael Langan, Paul Brennan are all out, while a decision will be made on Sean Patton at ‘the eleventh hour’.

On a more positive note however, Paddy Carr will speak to Peadar Mogan about returning to the panel.

St. Naul’s man Mogan is studying in Liverpool but is keen to play for his county, and Carr will speak to him tomorrow.

“We’re dealing with Peadar’s situation separately just with the logistics of it,” he said.

“He’s a very committed guy who obviously wants to play with Donegal and I’ll be speaking to him tomorrow.”

Shane O’Donnell is currently focused on the Sigerson Cup with his DCU side, while Naomh Conaill’s Ethan O’Donnell has expressed his wishes to travel.

Carr added: “Shane has made a decision as of this moment not to commit to Donegal and we respect his reasons for that.

“He’s currently tied up with Sigerson football but that can change.”

“Ethan has informed us that he wants to travel this year.”

On the injury front, Oisin Gallen is in recovery but will not be involved for the first two games at least, with Michael Langan in the same situation. Ciaran Thompson is also out after picking up an injury in the McKenna Cup, while Paul Brennan is still out after sustaining a long term injury last year.

But Carr has insisted that the injuries are more weeks rather than months, in the case of Langan and Thompson.

Among the definite players out listed above, there are still a couple of other injuries in the panel, that Carr did not name, but said they will be assessed this evening.

“There’s a question mark over 2 or 3 others, we’re actually training here tonight an we’ll be making a call based on the medical evidence.

“The unfortunate thing is these injuries were all except Ciaran, all injuries the lads carried into the start of the season, through the inter-county season with their clubs.

“The nature of the injuries are such that you’d like to think that you have the time to get them right. It would be short sighted to push them into games if the medical evidence is there that they could break down and wold be out for a significant amount of football.”

“Shaun Patton is a doubt, as Carr says it could go up to the eleventh hour on whether he will be selected.”