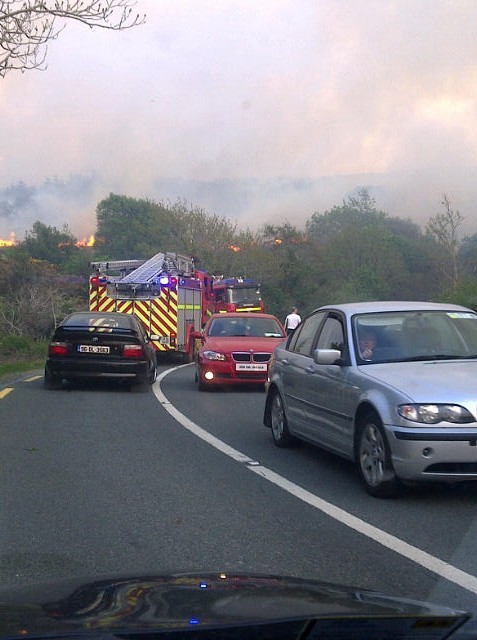 ONE of Donegal’s worst ever gorse fires continues to rage today – with homes and property under serious threat of being hit by the inferno.

Roads in and around Lettermacaward are closed to all traffic except emergency vehicles as fire officers and gardai respond to more than 70 calls for help.

A strong wind is fanning the flames.

The fires cover several square miles between Lettermacaward and Dungloe.

At one stage – according to an eyewitness around 6am this morning – the flames were so large, they actually jumped across the road at Cloughally and continued to burn towards Meenacross.

Fire crews from Dungloe, Glenties, Killybegs and other districts are still tackling the blaze.

Gardai have told us they have closed several roads as visibility is poor, but also the flames have now crossed the road at several locations.

A number of homes in Lettermacaward have been evacuated by the emergency services.

Fire service chief Bobby McMenamin said their work was particularly perilous because of the large number of homes in the rural districts.

“We would ask people to avoid the area completely today until the fire is brought under control,” he said.

A short time ago, a Lettermacaward resident told us: “Last night it looked like something from the Bible; it was very scary.

“There is a thick cloud of smoke in the area and it is hard to breathe. It is like something you’d see on the news in Australia or America but it’s happening in our own back yard here.”

You can read previous posts on this story here:

HOMES EVACUATED AS GORSE FIRES CONTINUE TO RAGE was last modified: May 1st, 2011 by admin