BREAKING NEWS: RALLY HALTED FOR REST OF DAY AFTER CRASH

The Donegal International Rally has been halted for the rest of the day after a competitor crashed. 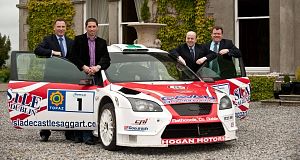 The emergency services rushed to the scene of the incident during the final stage of the day at Glen a short time ago.

Details of the crash are unclear but it is understood that the driver and his co-pilot are not seriously injured following the accident.

More than 70,000 spectators are expected in the county for the three day event which kicked off this morning in Letterkenny and is estimated to be worth over €20 million to the local economy.

The rally had to be abandoned on its final day last year following the tragic death of Cavan driver Thomas Maguire.

In 2008 a spectator was killed after he ran into the path of a competitor at Ballyare outside Ramelton.