JUDGE IS FORCED TO ‘PALM’ OFF MISSING WHEEL CASE

A Judge was forced to dismiss a case of a stolen wheel after Gardai could not prove a palm-print found on the car proved the accused was the thief. 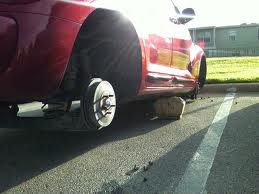 Before Letterkenny District Court was Johnny McDonagh of The Big Isle, Letterkenny.

The court heard how Gabriel McMahon came out of Letterkenny General Hospital on September 26th, 2009 having parked his car at St.Conal’s car park.

However he was left shocked when the front passenger wheel of he car was missing. The missing wheel was never found.

Garda John Madigan told the court that while examining the car he noticed a palm print on the wing of the car above the wheel arch.

Gardai suspected McDonagh stole the wheel and arrested him and processed his palm-print using the Automated Fingerprint Identification System and it showed it was the same one on Mr McMahon’s car.

However defence solicitor Frank Dorrian said it was a fact that a relative of Mr McDonagh’s was a patient in the hospital and he was there regularly.

He added that the hospital car park was a public area and there was a huge lack of evidence that his client was the person who took the wheel from the car.

AT HEARING © 2011 donegaldaily.com, all Rights Reserved