A group of brave fundraisers will attempt to pull a one tonne tractor more than 27 miles across Donegal for charity tomorrow. 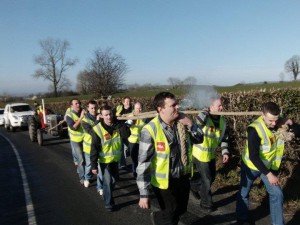 Members of the Donegal Macra na Feirme will haul the heavy tractor from Donegal Town to Raphoe in aid of local charities.

The group of 35 volunteers hope they will complete the marathon pull between 9.30am and 6pm collecting cash along the way.

One of the organisers Christine Patterson said they are asking as many members of the public to support them along the way.

“It’s not going to be easy but we’re keen.

“A lot of it is uphill to Raphoe which is the second highest town in Ireland but we’ll give it a lash.

“Anybody who sees us coming can drop a few coins in our buckets and make it worthwhile for charity,” she said.

The group are hoping they will also be entered into the Guinness Books of World Records for the longest tractor pull.

The group all have sponsorship cards and have been busy fundraising.

The group, aged between 17 and 35, have not decided which charity to give their cash to.