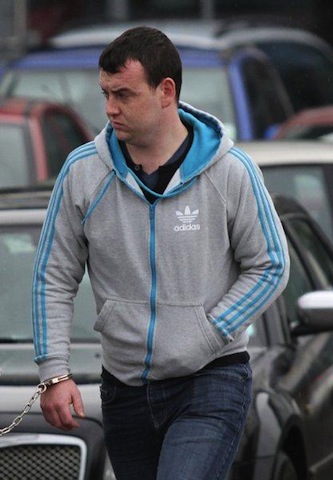 A man who beat a woman so badly that he left the footprint of his shoe on her body has been told he has brought great shame on his family.

He only stopped his reign of terror to get a drink of water.

He had been remanded in custody since he first appeared in court two weeks ago.

The court heard that Harkin, a butcher, had locked Ms Kerrigan in the house they shared and then beat her consistently as she cried for help.

Horrific pictures of her injuries were shown presented to the court. She suffered extensive bruising to her body and also a suspected broken nose and toe.

The court was told that Harkin drank six pints of beer and a litre of vodka before attacking Ms Kerrigan.

At one stage Harkin put his hands around his victim’s neck and Ms Kerrigan said she felt like she was going to die.

In a victim impact statement on behalf of Ms Kerrigan, the court heard that she sometimes cannot look at the couple’s young son because he reminds her of his father.

It also revealed how Ms Kerrigan, who was training to become a prison officer, can sometimes not leave her house for fear something will happen to her.

Judge John O’Hagan said there was “simply no excuse for assaulting a defenceless woman.”

He added that drink was no excuse but he found the fact that Harkin had no previous convictions and had not got into any trouble since impressive.

“You have brought great shame on your family. But your family have been very supportive and your father said the effect on the family has been devastating. He said ‘The Harkin family don’t do this type of thing’,” he said.

Judge O’Hagan said if he had not pleaded guilty but been found guilty by a jury then he would have jailed Harkin for between 2 and 3 years.

However he sentenced him to two years in prison but substituted the sentence for 240 hours community service.