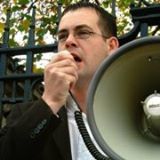 IT has taken decades of lobbying, but west Donegal is to finally get a sewerage scheme upgrade.

“I was assured at the meeting that the contractor for the Dungloe and Glenties Sewerage schemes was due to be announced shortly with works due to commence this summer.

“I am also of the view that following submission of the contract documents for the Gweedore Sewerage scheme from Donegal County Council to the Department that a positive outcome is likely which will allow the scheme go to tender by the end of the year.

“I am delighted to see that these schemes are progressing as locals have been waiting decades for the upgrade of the sewerage systems in these areas.”