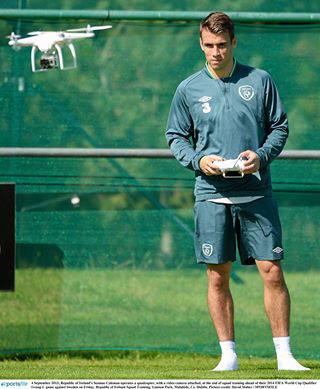 COLEMAN IN CRUISE CONTROL AHEAD OF CRUNCH CLASH WITH SWEDEN

Seamus Coleman has found a secret weapon that he hopes will dismantle the Swedish in Friday’s crunch World cup qualifier at the Aviva a remote control helicopter!!

The Killybegs native is now a key player for Giovanni Trapatonni’s Ireland side and has enjoyed an impressive start to the season at Everton.

He was pictured at training in Malahide earlier today playing with the remote control helicopter.

It has not yet been confirmed whether or not this was the helicopter used by Steve Bruce to fly Shane Long to Hull on transfer deadline day.

Coleman will be hoping he and his Ireland team mates can control the outstanding Zlatan Ibrahimovic as well as they control a remote control helicopter as they hope to secure three vital points in the quest for Rio 2014.