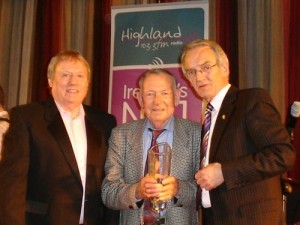 Packie pictured with Pio McCann and Brian Coll in 2010

DONEGAL has lost one of its greatest broadcasters with the death tonight of Packie Bradley.

The Buncrana man was on the airwaves for two decades before retiring in 2007.

He was the most listened-to presenter on Highland Radio.

Packie Keeney, who gave his namesake a start on the station, said tonight that has “deeply saddened” to hear of the death.