WRITING ON THE WALL FOR MAN WHO SPRAYED ‘UP THE DUBS’

A man turned up to complete a community service stint with a can of beer in his hand and spray-painted ‘Up The Dubs” on a wall. 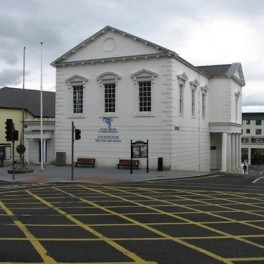 The case was heard at Letterkenny District Court.

Karl Ryan, 44, appeared at Letterkenny District Court after his community service duration had been revoked by the probation services.

Ryan of Burwood, Buncrana, apologised saying “I’m sorry about that and it will never happened again.”

His solicitor Ciaran MacLochlainn said the writing on the wall “could have been worse.”

He also revealed that Ryan was a full-time carer for a friend and if he received a prison sentence, she would lose the house.

He asked Judge Paul Kelly to give Ryan one more chance.

Judge Kelly put the matter to Ms Lennox of the Probation Services who said she believed Ryan was no longer drinking.

The case was put back until February but Judge Kelly warned Ryan that he had better behave himself.

WRITING ON THE WALL FOR MAN WHO SPRAYED ‘UP THE DUBS’ was last modified: November 26th, 2013 by Stephen Maguire
FacebookTweetLinkedInPrint
Tags:
Karl Ryanprobation reportsprayedUp The Dubs