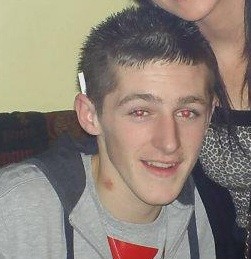 A THUG who bit and then head butted a Garda has appeared in court on several different charges.

Michael Devlin, from Manor Court in Convoy, pleaded guilty to charges relating to incidents on separate nights in 2012.

Inspector Michael Harrison told Judge Paul Kelly at Letterkenny District Court that 20-year-old Devlin came to the attention of Gardai outside a nightclub at 2.30am that morning.

Officers spotted Devlin throwing punches in the middle of a crowd and he was arrested.

On the way to Milford Garda Station Devlin told one Garda: “I’m going to f***ing stab you. I know where you live. I’ll bite your f***ing ears off.”

On arrival at the station, said the Inspector, Devlin continued to behave in an aggressive manner.

He then head butted Garda Paddy Ryan before biting the officer on the thigh.

“Garda Ryan said his leg began to bleed and he could see the teeth marks,” said the Inspector.

The garda lost some blood as a result of the attack and had to receive a tetanus jab and antibiotics. He was off work for a week as a result and had to wait several weeks for blood test results.

Whilst out on bail for those offences, Devlin started a row with Gardai in his native Convoy on August 12 2012.

Devlin had started a row a number of people at The Green, Convoy. He was warned to move on but instead became aggressive towards gardai and was arrested.

Defence solicitor Patsy Gallagher said Devlin is currently on a back to education programme and is due to become a dad for the second time.

“He is more settled now. He fell in with the wrong crowd and is no longer associating with those people.

“At the time of these incidents he was using class A drugs. He apologises profusely for what happened – he was completely high and stoned – on both cocaine and cannabis.”

Judge Paul Kelly adjourned sentencing until February 17 next for reports.