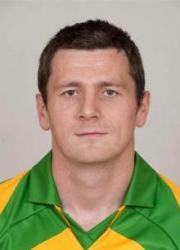 CATHAL MacSUIBNE’S GAA BLOG: An emphatic Donegal put Laois to the sword this afternoon and in the process made it very clear that they intend to keep their stay in Division Two to one season. Despite the hosts looking clueless at times and unwilling to work as hard as their opponents, this was still a mightily impressive display from Jim McGuinness’ charges.

Particular pleasing was how they kept their foot on the throttle long after the result and the two league points had been secured. The game was effectively over just after the restart, thanks to Colm McFadden’s goal, but he and his team mates posted 0-13 in the remainder of the match.

The hosts started reasonably well and indeed may have come into this encounter thinking that there was a chance of an upset given that they frustrated Donegal for long periods the last time the sides met, in Carrick-on-Shannon last July. That was under previous manager Justin McNulty and while his spell wouldn’t be termed a success amongst the Laois faithful, he did make his team hard to beat.

Now Tomas O’Flaharta has taken the reins with a stated mandate to bring positive football back to the O’Moore County – he has his work cut out going on today’s evidence. His team disappointed both from attacking and defensive perspectives; on numerous occasions in the opening period, Donegal created overlaps and were presented with four-on-three and five-on-three situations as the home defence looked a mess.

Odhran MacNiallais’ goal came from one such opportunity with Anthony Thompson making the incisive run from defence and after neat passing the Gaoth Dobhair man was on hand to palm the ball to the net. Even at that stage, the writing was on the wall for Laois.

Thompson was joined in many a raid forward by Neil McGee and Karl Lacey – both were operating in the full back line but bombed forward at will. Laois’ inability to cover the piercing runs from deep proved to be their downfall. It may be an unglamorous brief for a forward to track attacking forays from their markers but in the modern game it’s a must. With the runs not covered it led to some easy scoring chances for Donegal – almost all of their first half scores were from simple chances inside the 21-yard line.

The exceptions came from the right boot of Michael Murphy; firstly he nailed a 45′ into the teeth of the wind and moments later he stroked over an absolutely majestic point. With Murphy having to stoop to collect an ever so slightly under hit pass, Frank McGlynn made a run off the shoulder for his captain – it seemed easier to offload to the marauding wing-back but instead Michael dummied to handpass and with his marker, along with everyone else in O’Moore Park, buying the dummy he split the posts from forty yards. He repeated the dummy trick late in the game to nonchalantly register his second score from play (and sixth in total), this time off his left peg.

Christy Toye came into the starting line-up before the throw-in in place of the hamstrung Darach O’Connor and he had a fine game operating at centre forward. He’s still as good as any at picking a pass and he distributed wonderfully throughout his time on the field, which was cut short after suffering a nasty gash to his face.

Another who has had his share of injury trouble is Mark McHugh but he looked back to his best today, covering the ground like only he can. He was in the thick of things at both ends of the field and got his name on the score sheet in the closing procession. He also shipped a ferocious hit after a frontal charge in the incident that led to Laois’ Denis Booth being shown a red card. Despite the lead being enjoyed by Donegal at the time, his team-mates were incensed at the challenge and weren’t slow in making their feelings known to Booth and his counterparts.

The younger McHugh, Ryan, played at corner back and acquitted himself well and it is an area that the team could do with some competition for places. Paddy McGrath is still a number of weeks away from seeing some action so its likely we’ll see some more experimenting in the 2 and 4 jerseys in the next few games.

Debutant Hughie McFadden certainly put his hand up for some more game-time, scoring a brace of points after joining the action in the second half. McFadden was one of the stars of last year’s county championship, playing an integral role in Kilybegs’ march to the final. He can operate around midfield or on the edge of the square so it will be interesting to see how he develops in a senior jersey over the coming months.

Having two away fixtures to start with, Donegal knew a win or two from those would put them in pole position for promotion. They made a big statement today and the other teams won’t relish taking on the McGuinness juggernaut when it’s in this kind of form. Galway are next up in Salthill next weekend and after their defeat to Meath today they wont be looking forward to seeing another team in green and gold.