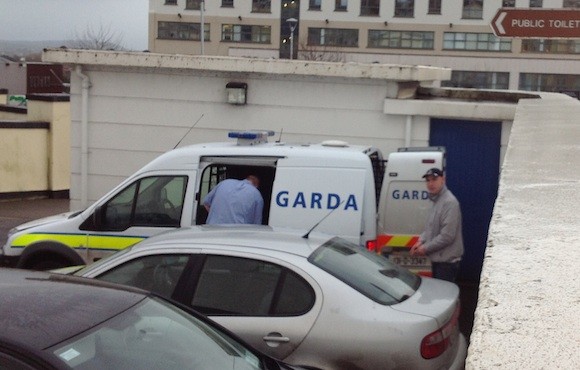 NOTORIOUS BURGLAR GIVES TWO-FINGERED SALUTE TO JUDGE AFTER BEING JAILED

ONE of Donegal’s most notorious criminals is back behind bars today after being jailed – but gave the judge who jailed him a two-fingered salute on his way out of court.

Dunkineely crook Karl Lydon pleaded with Judge Paul Kelly at Letterkenny District Court not to be sent to jail, claiming he was a changed man.

Lydon was caught by Gardaí in January after he stole almost €3,000 worth of items from five cars during a crime spree in Ballybofey.

The 24-year-old had been given bail just two weeks before the incidents in relation to theft offences last October.

Lydon, with an address at Croke Gardens in Thurles, Co Tipperary, smashed his way into vehicles on The Beeches estate and took a laptop, an iPhone, bank cards, bottles of holy water and prayer books.

Gda Inspector David Kelly told the court that Lydon had 53 previous convictions – most of them relating to theft crimes including 11 for burglary, nine for theft, two for stealing cars, two for trespass and two convictions for handling stolen goods.

Defence solicitor Patsy Gallagher said Lydon’s life had taken a “wrong turn” after the death of his brother several years ago and he had turned to drink. In January he had fallen in with “the wrong crowd again”.

Judge Paul Kelly said however that Lydon had “gone out and committed seven further offences within a fortnight of leaving this court on bail.”

Mr Gallagher said his client would be best served with counselling to prevent further offending and asked for a probation report to be considered.

An animated Lydon gestured to be allowed to speak and entered the witness box to tell the judge: “I really really want this chance judge.

“I’ve put in for counselling in Tipperary.”

Inspector Kelly said he had no questions for Lydon, adding: “The offences speak for themselves.”

Judge Kelly jailed Lydon for six months for the thefts and gave him a further six months prison sentence for the other break-ins, to run concurrently.

Lydon was given two further three month concurrent sentences for two thefts last October and fined €240. The court heard all the items had been recovered.

As an angry Lydon left the court, he turned to the judge and gave him a two-fingered salute. Judge Kelly, who had moved on to the next case, didn’t see the gesture.