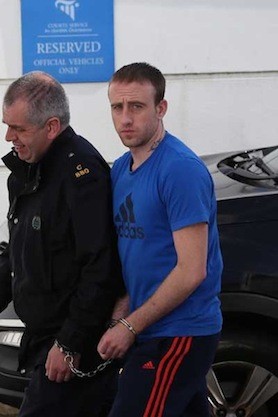 A serial robber was caught after a shop assistant disarmed him and sat on him until the Gardai arrived.

Michael O’Connor, 27, tried to rob the Glencar Filling Station in Letterkenny with a six inch knife.

He shouted at shop assistant James Doherty to give him the money and threatened him with a knife.

However, Mr Doherty managed to overpower the armed robber and lay on top of him until Gardai arrived during the incident on March 30th, 2013.

Once arrested O’Connor, who was wearing socks over his shoes to avoid his footprints being detected, then admitted to robbing another shop on Letterkenny’s Main Street.

He demanded the money from the cash register from shop assistant Aidan McLaughlin who put €759 into a bag.

O’Connor fled down a side lane and was later stopped by Gardai but the cash was never recovered.

The court heard that O’Connor, who is originally from Kildare, had 43 previous convictions many for robbery.

O’Connor’s barrister said his client had grown up in a very challenging environment after his mother died and father left the family home at a very young age.

He had been put into foster care but had since become a heroin addict.

He is currently in Portlaoise Prison serving another sentence but is now drug-free and working in the prison and doing well.

Judge Keenan Johnson said robberies by heroin addicts with violence are all too common and they the courts must “deal with them in a firm way.”

“He has a deplorable record which shows he has been involved in numerous robberies,” said Judge Johnson.

But he added he appeared to be trying to become an upstanding member of society.