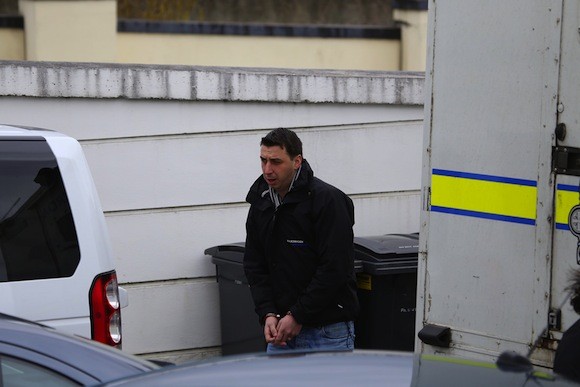 Gareth Reid being brought back into court in handcuffs for an earlier court hearing.

A former Donegal county councillor who told his ex-partner he would put a bullet between her eyes has been told he could face a jail sentence.

Gareth Reid, 31, appeared at Letterkenny District Court yesterday facing a total of fourteen charges of breaching a barring order and also another of criminal damage.

The cases relate to a number of incidents involving the mother of his three children who also appeared in court.

The incident s go backs to March 23rd last year up until March 15th of this year at various locations including a shop, a bar and a private house.

Garda Inspector Michael Harrison read out the breaches of the barring order which saw Reid telephone and text his ex-partner dozens of times.

On one occasion he telephoned her 23 times in a number of minutes.

He also called to her home in Stranorlar demanding to see his children.

He tried to gain entry to the woman’s house and when he could not he left her a message in which he told her “A good slap will knock some sense into you. I’m going to break your f***ing mouth when I get back.”

On April 1st last the woman said she was left terrified after he told her “The next time I see you, you will get a bullet between the eyes.”

The woman said she was terrified as Reid, of Lawnsdale, Ballybofey, worked overseas and she thought he may be able to get a gun.

She gave evidence saying that although she accepted he could see his children, she did not want to ever have anything to do with him again.

The accused gave evidence that he now accepted that the couple’s relationship was now over and he apologised to the woman in court.

“I am disgusted with myself,” he said.

But the woman said she did not accept that he thought their relationship of 12 years was finished.

She said their eldest child had his communion recently and that Reid had then posted a picture of them together as his Facebook profile.

Judge Paul Kelly described the case as an “extremely sad” one in which an awful lot of heartache had been caused to the woman and her three beautiful children.

“She has been left helpless because she had a safety order which was being breached all the time. He did spend a few short spells in custody but he persisted to offend and breach his bail on a number of occasions,” said the Judge.

He asked for a probation report to be carried out on Reid and adjourned the case until July 17th.

However, he warned Reid that he was not ruling out the possibility that he may face a term in jail.