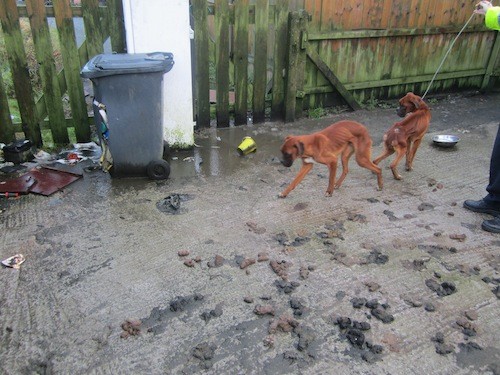 The two dogs left in squalid conditions at the house in Raphoe.

A mother-of-two must contact the ISPCA if she is ever planning to get a pet dog after being found guilty of cruelty to animals.

The boxer dogs, named Mitch and Samson, were found in their own excrement, were covered in sores and were drastically underweight at Ms Gallagher’s home in Raphoe on January 15th, 2013.

MItch and Samson were close to death according to ISPCA staff.

However Kelly moved out in September, 2013 and the dogs were found by ISPCA officers in horrific conditions four months later.

ISPCA Inspector Kevin McGinley said had the dogs been left in the yard any longer, they may well have died.

“The dogs were in horrific condition and had they had been left at this address any longer, they could have died from neglect,” he said.

Ms Gallagher, of Meadow Hill, Raphoe pleaded guilty to two charges of cruelty to dogs through her solicitor Frank Dorrian.

Mr Dorrian said Ms Gallagher did not have the financial means to keep the dogs and had no plans to get any dogs in the future.

Mitch was vastly underweight and covered in sores when found.

A vet who inspected the dog revealed that in her 27 years of practice, she had rarely seen young dogs in such an emaciated state.

There were dog bowls in the yard but there was no food in them.

Mr Dorrian handed in €330 into the court from Ms Gallagher to partially compensate the expenses paid by the ISPCA.

He said the situation was that she had been left with the dogs, had little means and that her two children came first.

ISPCA Inspector McGinley appealed to people to contact animal welfare agencies if they cannot cope with the upkeep of dogs or any other animals.

“We appreciate that with the current financial downturn some people are finding it difficult to look after animals.

“We would appeal to those people to contact the relevant agencies at an early stage so we can assist them,” he said.

He also asked Judge Paul Kelly to order Ms Gallagher to contact the ISPCA in the event of her getting a dog after her two year ban was up.

The court was told that Mitch and Samson have made a full recovery since their ordeal and have now been re-homed in Co. Meath.

WOMAN CHARGED WITH CRUELTY MUST CONTACT ISPCA IF SHE WANTS TO OWN A DOG was last modified: June 10th, 2014 by Stephen Maguire