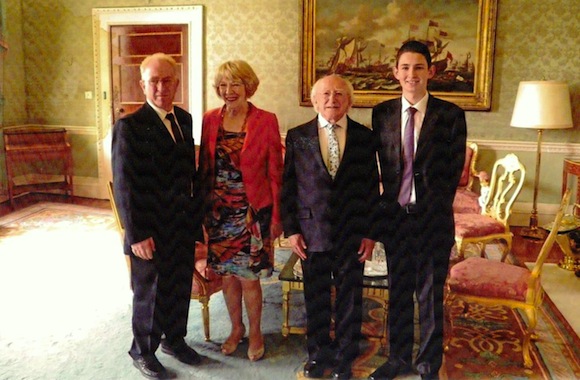 A young student’s invitation to President Michael D Higgins to visit him in Donegal has backfired in a wonderful way!

Declan Coll, a 16 year old PCC student from Ballina, Falcarragh, thought it would be a nice idea to invite the President to our county.

The idea came to Declan after he a story about an American student who had written a request to President Obama asking him to visit his school.

Declan figured it was time the President came to our neck of the woods, so he wrote to him asking if he would like to visit his school Pobalscoil Chloch Ceann Fhaola in Falcarragh.

But due to his busy schedule, the President had to decline the invitation.

However the President did the next best thing and invited Declan and a guest to attend his Garden Party at Áras an Uachtaráin on the 12th July.

Declan and his father Michael traveled to Áras an Uachtaráin where he shook hands with and spoke with President Higgins.

When asked what the conversation was about, Declan just smiles and says, “I told him to keep the seat warm for me as I intend to take over his position in the future.”

Declan and Michael ended their day at the tea party, followed by a tour of Áras an Uachtaráin.

“That was an experience I’ll never forget,” said Declan, “I wonder who I can write to next……?”