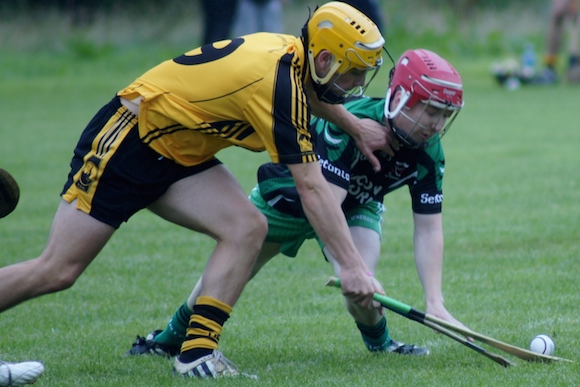 St. Eunan’s scored a significant win in the Donegal SHC over last year’s finalists Setanta at the Crossroads. Given the very wet conditions from the outset, scores were always going to be at a premium. The first half was a low scoring affair. An early Colm Breathnach free for the away team was cancelled out by two strikes from Kevin Campbell and Bernard O’Brien. A free on 17 minutes and a fine point from play from Seán McVeigh edged St. Eunan’s in front, but a late 65 by Campbell left the teams level at half-time, 0-3 each.

On the restart McVeigh and Campbell exchanged points before a long range free by Campbell on 39 minutes gave Setanta the lead. Playing with the wind advantage, however, St. Eunan’s gradually took control. With Conor O’Donnell, Adie Gaffey, Colm Flood and Seán McVeigh dominating affairs around the middle of the field there was constant pressure on the home defence, where Shane Gallen and Mark Callaghan were outstanding. Points from Conor McVeigh, Sean McVeigh and a Eugene Organ free put the visitors two points in front with ten minutes left. A Campbell free on 52 minutes was cancelled out by the game’s standout performer Conor O’Donnell, who won a puck out on his own half back line and finished off the move after an exchange of passes. The home team kept coming back and another Campbell free set up a tense finish. In the last three minutes, two further McVeigh frees opened up a three point gap. The Letterkenny team finally sealed victory with a goal in the final moments, when a Conor Parke shot found the roof of the net.

Both teams go forward to the next match in the SHC round robin, with Setanta away to Burt and St. Eunan’s facing Mac Cumhaills.