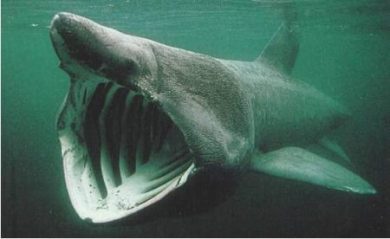 MYSTERY AS DONEGAL’S ICONIC BASKING SHARKS DISAPPEAR FROM OUR COAST

The huge Basking Shark is usually found in Donegal waters in summer months.

One of Donegal’s most unusual summer visitors has disappeared and left scientists baffled as to why.

In recent years our waters have become a hotbed for giant Basking Sharks.

Hundreds of the magnificent creatures are usually spotted swimming off our coast from Malin Head to Bundoran, with their huge mouths trawling for plankton.

The docile creatures have become a favourite for maritime tourists.

However there have been unusually few sightings of the creatures which grow up to an average of eight metres long (26ft).

Even more worrying has been almost no sightings of the creatures in the normal hotspot around Malin Head up until last week.

Scientists investigating the disappearance suspect the sharks may have by-passed Ireland and traveled to the waters off Scotland instead.

They believe the sharks may have gorged themselves earlier in the year and traveled to Scotland instead.

Emmett Johnston of the Basking Sharks Study Project, who is based in Inishowen, says unusual winds may have pushed the sharks further out to sea.

He said “Preliminary investigations suggest that the sharks travelled from Irish waters to Scottish waters after gorging themselves off Slea Head and the Blaskets early in the year.

“In previous seasons the sharks have passed close by Malin Head in mid May to early June but this year we believe that the sharks as a whole may have travelled further offshore than previous years because the Malin front was pushed further west than normal by unusually prevalent Northerly winds in the early summer.”

A year on year tracking study currently being undertaken by Scottish Natural Heritage and the University of Exeter also suggest this may be the reason for the shark’s disappearance from Irish waters.

Scientists are hoping the sharks will return to Irish waters before the end of the summer so they can continue their research about the mysterious creatures.

“Our research teams are ready and waiting with lots of new initiatives aimed at discovering more about these iconic animals to further our campaign to gain protection for the species in Irish waters,” added shark expert Emmett.