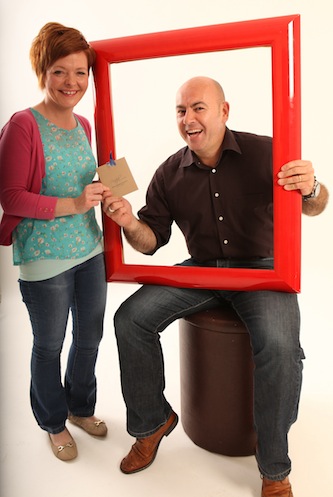 Jacqueline Molloy receives her voucher for a free family portrait at Cristeph Studio from Stephen Maguire, editor of Donegal Daily.

Donegal Daily has teamed up with the Cristeph Studio in Letetrkenny to offer readers a chance to win a FREE family or child’s portrait.

Every Friday in August we will be giving away a free framed portrait by well-known press and studio photographer Brian McDaid.

There is no cost to enter – no difficult questions and no premium textline numbers.

All you have to do is to like the Cristeph Studio’s Facebook page. It couldn’t be simpler!

The winner of the first framed portrait is Jacqueline Molloy from Fintown.

Jacqueline revealed she was planning to have a family portrait done with husband Paddy and son Charlie.

“I’m so happy. I never win anything so I was on Donegal Daily and I thought I’d give the Cristeph Studio a like.

“I couldn’t believe I won it when I got the phonecall. I’m really looking forward to getting a family portrait because it is something we can keep forever,” she said.

There are lots more chances to win a free framed family of child’s portrait and al you have to do is to like Christeph Studio on Facebook here https://www.facebook.com/pages/Cristeph-Studio/305666329486672

All likes between now and the end of the month will be in with a chance of a free framed portrait each week – so get liking!