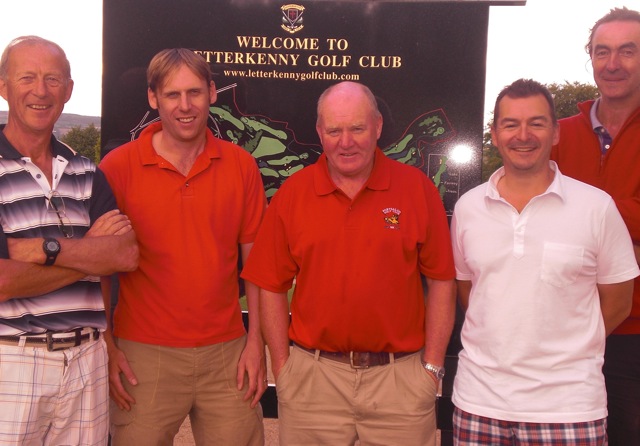 Gerry Houlahan, William House, Martin Flynn, Jez Warren and John Egan all of whom hail from London praised the fantastic course at Barnhill.

This group of golfing visitors received a warm “Céad Míle Fáilte” when they arrived to play Letterkenny Golf Club on Saturday last.

All five of the party were single figure handicappers from Wimbledon Common Golf Club in London and were in full agreement in their praise of the condition of the course and the speed of the greens.

They also expressed their delight of the surrounding scenery and were full of praise of the hospitality and the choice of meals available both from the restaurant and the bar food menu.

With ancestral connections from Counties Kerry, Galway and Sligo, the “touring golfers” were planning on playing Rosapenna, Portsalon, NarinPortnoo and Murvagh Golf Clubs in Donegal.

The tourist’s spokesman, John Egan, explained that Wimbledon Common G.C. was the second oldest golf course in England, established by the London-Scottish Regiment of the first world war and in honour of that regiment the club colours are Pillar Box Red.