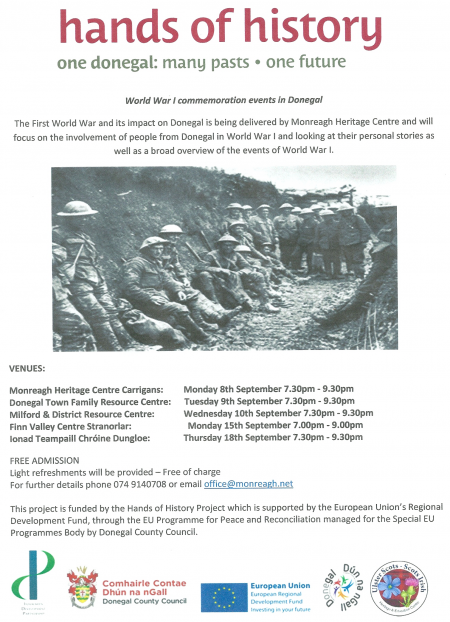 A series of unique and insightful talks which will discuss and highlight the impact World War 1 had on Donegal, will be chronicled in a series of talks by Monreagh Heritage Centre which takes place all over Donegal during the next two weeks.

The talks will focus on the The First World War and its impact on Donegal, and it will be delivered by Steve Hunter from Monreagh Heritage Centre at venues across the county.

The talks offer a truly fascinating and detailed insight into the impact the war had on Donegal and the role many of its sons and daughters played in The Great War.

Speakers will recall the involvement of people from Donegal in World War I and will look at the personal stories of those involved, as well as giving a broad overview of the events of World War I.

The talks which are FREE to attend, start next Monday night at the Monreagh Heritage Centre in Carrigans.

Below is the detailed timetable of the dates and venues.

As stated above admission is FREE and light refreshments will also be provided – FREE of charge.

This project is funded by the Hands of History Project which is supported by the European Union’s Regional Development Fund, through the EU Programme for Peace and Reconciliation managed for the Special EU Programmes Body by Donegal County Council.