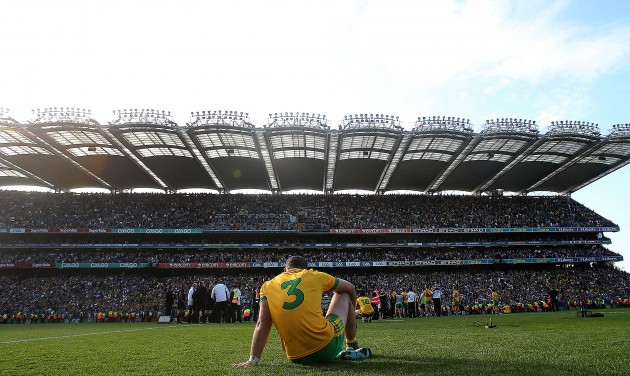 EMMET RUSHE: EVERY MEMBER OF THE DONEGAL SQUAD IS A TRUE CHAMPION

BY EMMET RUSHE: The All Ireland Championship 2014 has now been and gone.

There was joy, there was heartache and there was huge disappointment for the 35,000 Donegal fans that travelled to Croke Park and for the 125,000 back in Donegal who were glued to their televisions.

This collective heartache however is nothing compared to the near grief that the Donegal squad themselves would have felt at the final whistle.

How many of you reading this knows what it takes to become a champion?

The post-mortems were done in every home and in every pub in the county last night. We all have our opinions on whom or what was to blame for our “loss” yesterday. However, we should remember that every single man, on the pitch, on the bench and in the backroom team, is a champion. They have done us proud. The only post mortem that matters is that of the team. Its function will not be to assign blame. It will be to reassess; to look forward to next year.

Most people would have an idea of the training and the games and the travelling involved, but that is only a small part of it.

What the Donegal squad put themselves through day in and day out is on par with any professional team.

The difference is that our 26 man Donegal squad are not professionals.

They are amateurs who are playing at a professional level.

Under the direction of Jim Mc Guinness, the past 4 years have been some of the best that Donegal GAA has ever seen.

The level of professionalism that Jim has brought to the squad and has instilled into the players is simply outstanding.

This level of professionalism comes at a price however.

They do not have the luxury of being able to train when it suits them.

They do not get paid for what they do.

They sacrifice time with their partners and wives.

They sacrifice time with their families and children.

They have to fit training around their jobs and their college work.

They play for clubs and college teams who need these guys to field out for them also.

Their off season is practically non-existent.

But that is what they signed up to.

The 26 man Donegal squad do not see this as a problem.

They see it as the honour and a privilege that it is to play for your county.

This is something that some people simply don’t get.

People can’t understand what drives them; why they sacrifice so much for so little.

That, however, is the difference between a recreational sports person and a champion.

A champion has a mind-set that is single minded and all encompassing.

Their focus is on one thing and one thing only; the win.

As the teams progress further into the All Ireland football championship, their focus becomes greater; the taste for victory becomes sweeter.

Then on the day the All Ireland final finally comes, these guys step out in front of 83,000 noisy fans and pour their hearts out for 70 minutes until one team is raised to the heights of joy and the other team are slammed into the depths of despair.

We could see this at the end of yesterday’s game; pain etched on the faces of the players.

It is said that you should be gracious in victory along with defeat.

This afternoon, Michael Murphy stayed on the pitch until after the presentation of the Sam McGuire and went over to each of the Kerry players as they came down the steps and shook each of their hands.

That is the mark of a true champion.

EMMET RUSHE: EVERY MEMBER OF THE DONEGAL SQUAD IS A TRUE CHAMPION was last modified: September 22nd, 2014 by John2