Damien Mc Cauley demonstrates how weak the blocks are from his house built in 2006 . All of the outer walls have to be replace at his family home, and his family had to move out. Photo Brian McDaid

A young family have been left €30,000 out of pocket after discovering their home was made out of ‘weetabix’ cement blocks.

The McCauley family moved into their dream home on the outskirts of Letterkenny in 2006.

But a couple of years later they began to notice cracks up the side of the house. 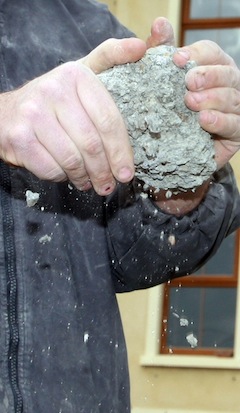 Damien Mc Cauley demonstrates how weak the blocks are from his house built in 2006 . all the out wall have to be replace at his family home, and his family had yo be moved out. Photo Brian McDaid

It got so bad in recent weeks that the family have been forced to move into rented accommodation.

Now Damian McCauley and his family have been forced to remove the entire outer shell of his house, as well as footpaths and insulation.

Damian, 33, said he has been told by engineers that his blocks have about the same strength as ‘weetabix.’

“I have been forced to take down the entire outer shell because we feared the entire walls would come in on top of us,” he said.

The family moved out of their five bedroom, 2,900 sq ft home at Woodlands overlooking Lough Swilly three weeks ago when it got too much for them.

“My wife couldn’t sleep at night and she was constantly crying because she was afraid the walls were going to come down. That’s how serious it was.

“My children, who are aged 5 and 2, were also terrified.

“I’m involved in contracting so I decided the only thing I could do was to rip the entire outer shell down, suck out the pumped insulation and start again with tested blocks.

“That’s what I am doing now to give my family some peace of mind and to save my house.

“It will cost at least €30,000 to do that but if it means getting my house back and keeping my family safe, then that’s why I have to do,” he said.

Damian said he is now considering pursuing the block supplier through the courts.

And Damian isn’t the only person who has been affected by the bogus blocks.

A group of more than 60 householders who are suffering similar problems have set up a campaign group called the Mica Action Group.

The group aim to raise awareness of the problem across Donegal.

Damian estimates that the problem of the defective blocks is much greater than many householders know.

“I suspect that hundreds if not thousands of householders are affected by these defective blocks.

“We want to raise awareness of this problem and to build a strong voice so we can approach the Government we our campaign and seek some kind of redress,” he said.

The Mica Action Group can be contacted by emailing micaactiongroup@outlook.ie

FAMILY CRACKING UP AFTER BEING FORCED TO MOVE OUT OF ‘WEETABIX’ HOME was last modified: September 25th, 2014 by Stephen Maguire
Tags:
blocksbuilderDamian McCauleydonegalGovernmenthouseletterkennyWoodlands