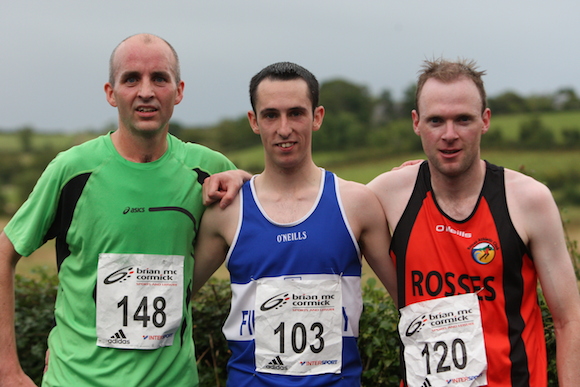 Last Sunday the Cross Country season kicked off in Magheragallon with large crowds travelling from all over Donegal.

This was followed by the men’s event where Ciaran McGonagle lead the men home with a 4th place finish, followed closely by Kevin McGee, Brian McBride, Brendan McBride, Michael McElroy and Eamon McGee.

Next up was the underage races and the club had some excellent individual performances as well as team performances.

A big thank you to everyone who assisted in any way in the lead up to and on the day of the cross country championships in Magheragallon last Sunday.

It was great to see so many parents out encouraging all the young athletes and look forward to seeing you all in Castlefinn this coming Sunday. The action now moves to the Uneven Age groups and Novice races.

The bus will be leaving Gweedore GAA at 10am, Annagry car park at 10:15 and Supervalu Dungloe at 10:30. Contact Ita to secure a place on the bus.

Cross country training continues for all adults in Mullaghderg every Wednesday and Friday at 6.

There is a group of athletes training in Gweedore each week which are focus mainly on marathon training towards Dublin but open to anybody in getting some distance training done.

This group are meeting Wednesday and Fridays at 7pm at Euroflex, Gweedore Industrial Estate.

There are different distances and paces to suit all. Anyone training for a Half Marathon or Marathon is welcome to come along.