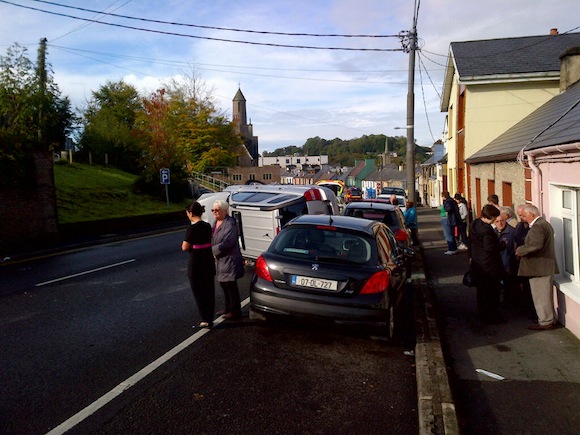 The Kia car on its side after the crash a short time ago. Pic Donegal Daily.

BREAKING NEWS: A motorist has been rushed to hospital after a dramatic car crash in Donegal Town.

The Kia vehicle he was driving flipped over on to its side after colliding with a Ford car just before 11am.

Fire crews, ambulance staff and Gardaí are at the scene where the female driver of the Ford car has been treated for shock.

The badly-damaged Ford car which was also involved in the crash.

The scene at Upper St has been sealed off, with large tailbacks at the centre of Donegal Town as a result.

Gardaí forensic collision investigators are due to arrive at the scene shortly to begin an investigation in to the crash.

One eye witness said, “Both drivers seem to very shaken up.

“The driver of the Kia whose car turned on its side, doesn’t appear to be too badly hurt.

“It look as if he’s been very lucky though.”

Fire crews are now beginning to preserve the scene, and are planning to remove the vehicles once the Gardaí carry out their investigations.

Gardaí have warned motorists that the road may be closed for a number of hours.

Gardai arrive at this morning’s crash.