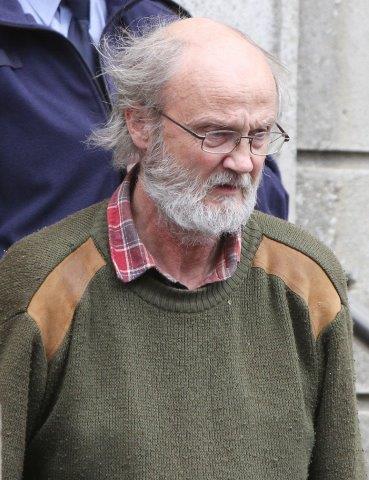 THIS is the Danish tourist caught after stealing a poor box from a Co Donegal church.

He is Jens Christiansen, from Ledegardskov, Graasten – and he was nabbed with hundreds of euros of other coins – when he was spotted at Grainne’s Gap on October 9.

Garda Paul Lynch told Carndonagh Court that the 61-year-old was very nervous when he asked him what he was doing there.

There were bags and bags of coins in the hire car which Christiansen had hired at Dublin airport.

“He said he had brought the coins into Ireland in his hand luggage which wasn’t credible because there was so much of it. It had been bagged and marked,” said Garda Lynch.

During the search of the car, Gardaí found a collection box which had been stolen from Linsfort chapel in Buncrana.

They also found three screw drivers, gloves, a hacksaw and a torch.

“At that stage the accused admitted stealing the box from the church and that he was about to use the hacksaw to break it open,” said Detective Lynch.

Judge Paul Kelly asked the accused what he was doing in Ireland and stealing church collection boxes to which Christiansen replied: “It was a bad idea. I am a tourist.”

Judge Kelly ordered that the church collection box and its contents be returned to the church and ordered that all the other coins be forfeited to the State, but allowed the thief to keep €355 in cash to allow him to return to Denmark on his Norwegian Airlines flight on October 27.

He jailed Christansen for three months but back-dated the sentence to October 9.

However, he suspended the rest of the sentence from October 26 for a period of two years on condition he does not return to Ireland.