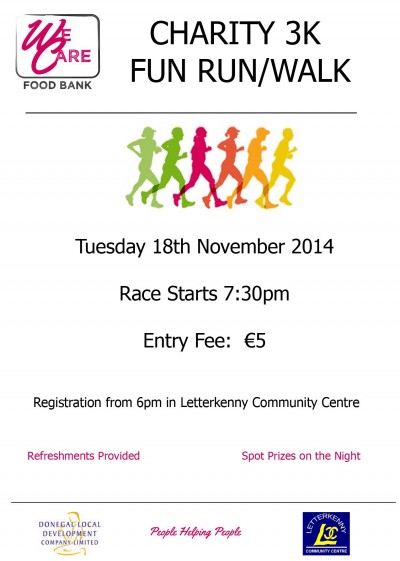 ‘We Care’ a voluntary organisation whose aim is to deliver services to those who are most in need, have opened a FOOD BANK in the Letterkenny/Donegal Area.

A group of volunteers got together in the Autumn of 2013 to explore the idea of setting up a soup kitchen in Letterkenny.

As they explored this idea, they came across the idea of a Food Bank. We formed a committee and called ourselves “We Care”.

They did some research and found some startling reports of poverty in Donegal.

They made contact with Cross Care in Dublin who operate a food bank and who have become our main supporter and we discussed the possibility of a Food Bank in Letterkenny.

They travelled to Cross Care in Dublin and met with the manager who provided us with the working model of how to operate a Food Bank.

Cross Care made contact with the volunteers in July to say that Kellogs had agreed to deliver food to them on a monthly basis once they were ready to receive a drop.

Thus they set about looking for premises.

We Care have a room for storage at present and are ready to start collecting food.

However, they urgently require Shelving and a Food Weighing Scales.

They also urgently need some Sponsorship.

Their mission is to work in partnership with local agencies to assist those affected by food poverty and food deprivation within a defined area.

Our goal is at all times to maintain dignity and respect for participants for whom we provide services.

Food Banks throughout the country are proving to be successful and following through on their aims and objectives.

We Care feel confident that a food bank in Letterkenny will also be successful and meet the needs of people.