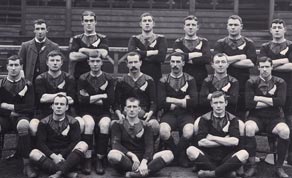 TG4 is set to broadcast a tribute to Ramelton native Dave Gallaher.

Filmed in Ireland and New Zealand ‘All Black na hEireann’ (Ireland’s All Black) airs at 9.30pm tomorrow (Sunday) on TG4.

The Square One Productions film tells the story of Dave Gallaher who would go on to become possibly the greatest ever captain of the All Blacks rugby team before he died tragically in the Western front during World War One.

The documentary features world renowned experts and formers All Black players who remember the Donegal All Black who changed the face of rugby.

Producer Shane Tobin comments: ‘The story begins in North West Ireland. Born in Ramelton, Co. Donegal in 1873 and ends on the trenches in World War One.

“Between these two events Dave Gallaher changed the landscape of sports and created the enigma of the All Blacks that we know today out of great hardship and Cathal did a great job in bringing the story to Irish TV viewers through amazing never seen archive of those days.

“He is possibly the most influential figure in rugby as he created the mystic of the All Blacks and their tactical playbook which created an amazing record in international competition. That makes him one of the most influential Irish sports stars ever, despite being so unknown.

‘All Black na hÉireann’ was written and produced by Shane Tobin (‘Hill 16’, ‘Dhá Chúirt’, ‘Dialanna ón gCogadh Mór’) Editor on the piece was Áine Furlong with Andrew Edger on camera. Online editing and mixing was carried out at Reelgood studios in Dublin and it was directed by Cathal O’hÚallachain for Square One productions.

Tobin continues: ‘This is the first documentary to be made for Irish TV on such a great Irishman who so few know about, but changed the world forever.”

Another Square One productions film, their eight part series on World War 1 ‘Dialanna ón gCogadh Mór’, continues every Wednesday at 9.30pm on TG4 up to December 17th.